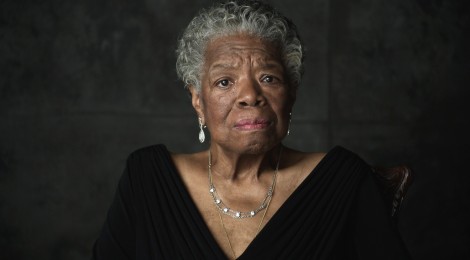 I Know Why The Caged Bird Sings

on the back of the wind

till the current ends

and dips his wings

in the orange sun rays

and dares to claim the sky.

But a bird that stalks

down his narrow cage

can seldom see through

his bars of rage

his wings are clipped and

his feet are tied

so he opens his throat to sing.

of the things unknown

but longed for still

and his tune is heard

on the distant hill

for the caged bird

The free bird thinks of another breeze

and the trade winds soft through the sighing trees

and the fat worms waiting on a dawn-bright lawn

and he names the sky his own.

But a caged bird stands on the grave of dreams

his shadow shouts on a nightmare scream

his wings are clipped and his feet are tied

so he opens his throat to sing

with a fearful trill

but longed for still

and his tune is heard

on the distant hill

for the caged bird

Maya Angelou, born April 4, 1928 as Marguerite Johnson in St. Louis, is an author, poet, historian, conductor, actor, singer, songwriter, playwright, film director, and civil rights activist. Born in a segregated rural area of St. Louis, Missouri, she comes from a broken home, was raped at eight, and was an unwed mother at 16 years old. Throughout all these circumstances she still managed to become San Francisco’s first black woman conductor. She was also the first black woman to have an original screenplay produced in 1971, Georgia, Georgia. She has several volumes of poetry and some of her composed music was recorded by B.B. King. She was also nominated for an Emmy Award for her acting in Roots and Georgia. She is fluent in French, Spanish, Italian, and West African Fanti. One of Maya Angelou’s books, I Know Why the Caged Bird Sings, an account of her youth, describes the trauma of being raped as a child, the violent death of her attacker, and her subsequent refusal to speak for five years. It has been the target of many censorship attacks. In one case, Round Rock, Texas parents thought that the book was “pornographic” and “just plain filth.” The book was also filmed as a two hour special for CBS. Currently, Ms. Angelou lectures throughout the United States and abroad and recently has been named a Reynolds professor of American Studies at Wake Forest University in North Carolina.