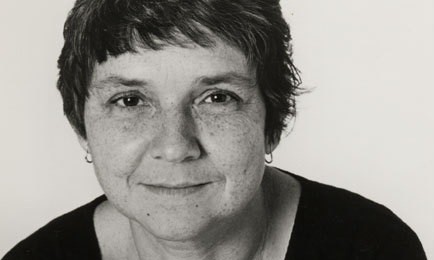 Poet and essayist Adrienne Rich was one of America’s foremost public intellectuals. Widely read and hugely influential, Rich’s career spanned seven decades and has hewed closely to the story of post-war American poetry itself. Her earliest work, including A Change of World (1951) which won the prestigious Yale Younger Poets Award, was formally exact and decorous, while her work of the late 1960s and 70s became increasingly radical in both its free-verse form and feminist and political content. Rich’s metamorphosis was noted by Carol Muske in the New York Times Book Review; Muske wrote that Rich began as a “polite copyist of Yeats and Auden, wife and mother. She has progressed in life (and in her poems …) from young widow and disenchanted formalist, to spiritual and rhetorical convalescent, to feminist leader…and doyenne of a newly-defined female literature.” Bright topaz denizens of a world of green.

They do not fear the men beneath the tree;

They pace in sleek chivalric certainty.

Find even the ivory needle hard to pull.

When Aunt is dead, her terrified hands will lie

Still ringed with ordeals she was mastered by.

The tigers in the panel that she made

Will go on prancing, proud and unafraid.