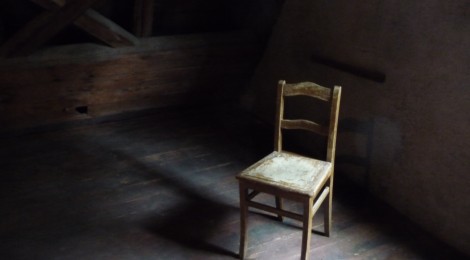 Room: A Nightmare, Real and Imagined

Imagine the only world you’ve ever known measuring eleven by eleven feet.  The only source of natural light is a single skylight, and you have never met anyone your age.  In fact, you’ve never met anyone aside from your mother, who shares your restrictive existence.  This is the world of five-year-old Jack in Emma Donoghue’s masterfully written work, Room, winner of six literary awards worldwide, and shortlisted for seven others since its publication in August 2010.

Jack’s mother is a college student who, kidnapped seven years earlier, was kept in a soundproof shed by a man known to Jack simply as “Old Nick.”  Jack is born two years into her imprisonment, the product of one of Old Nick’s routine rapes.  Nevertheless, Jack’s relationship with his mother verges on normal.  Stressed from reading the same story for the umpteenth time, and arguments over eating green beans, Jack’s mother is determined to provide the best for her child in the small ways she can.  She argues with her captor for vitamins, enforces an exercise regimen, and says grace with Jack before every meal.

The situation is eerily true-to-life, acknowledging elements of human adaptability to even the harshest of circumstances.  Although he is pale with a compromised immune system from never having been outside, Jack is bright, inventive, and feisty.  Donoghue deemphasizes the role of Old Nick, focusing instead on the cohesiveness of the mother-son bond and the development of Jack’s character.

Around Jack’s fifth birthday, his mother begins explaining to him the concept of Outside.  “When I was a little kid I thought like a little kid…but now I’m five I know everything… it makes my head tired,” Jack states.  While he is not particularly keen on leaving the familiarity of Room, Jack’s mother becomes increasingly decided that Jack can and must have a normal childhood.  She devises a plan to break the two out of Room, now that her son is old enough, and they embark on an escape.

Donoghue does not end there, because in many ways, the battle for freedom and normalcy only begins with the getaway.  Jack now has to adjust to everything from riding in cars to the feeling of grass.

As far-fetched as we would like to imagine this novel is, Donoghue was not only inspired by true events, but also had to delve deep into many infamous cases of dysfunctional families, kidnappings, rapes, and infanticide.  “This is a hideous line of research,” Donoghue admitted in a National Post interview “I wish I could clean out my brain.”  A particularly grotesque story of pivotal influence to the author was the Fritzl Case of 2008 from Austria.

Joseph Fritzl was convicted of having kidnapped his own daughter, Elisabeth.  For 24 years he kept her in his basement, raping her and fathering seven children from the incestuous relationship.  Fritzl had convinced everyone, including his wife, Elisabeth’s mother, that their daughter had run away to join a cult.  He even forced Elisabeth to write letters to her parents intermittently to preserve the facade.  Eventually due to a health emergency, one of the children had to be rushed to the hospital.  Fritzl’s story began to splinter, the authorities were called, and Elisabeth and the captive children were rescued.

“Imagine realising that the world is not the locked-up room you thought it was,” Donoghue told Macleans, “this idea of a wide-eyed child seeing the world completely anew just gripped me.”  For those who criticized the author on her book’s morbid and macabre nature, it should be noted that the real life events from which this story was inspired, put bluntly, are a hell of a lot worse. The youngest sibling in the Fritzl’s case is Felix, incidentally five years old at the time of rescue.  A detective on the case recalls how the boy pointed at the moon upon seeing it for the first time asking, “Is that God up there?”

Donoghue’s characters struggle with personal resilience and adaptability when confronted with the unthinkable.  At the end of the novel, Jack’s new, still wavering, state of freedom even inspires a certain measure of hope for cases like the Fritzls.

Tags: Emma Donoghue, imprisonment, Room
← I Had a Black Dog, His Name Was Depression
My Name is Alan and I Paint Pictures →