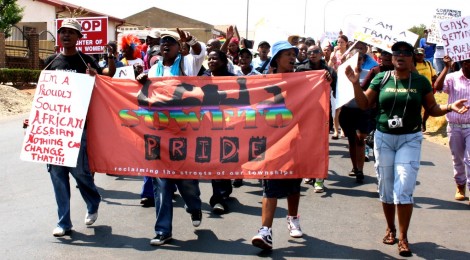 In 2009, Zukiswa Gaca, a 20-year-old lesbian woman in South African, decided to take her own life by laying down on the local train tracks after she had been raped for the second time.   A victim of corrective rape, Zukiswa is one of the many lesbian women throughout the world who have lived through the horrors of violent homophobia and struggle to exist within a culture that openly and actively rejects their sexuality.

Corrective rape is a hate crime.  Individuals perceived to be homosexual or transgendered are sexually assaulted in an attempt to strip them of their sexual or gender orientation.  It is a violent and demeaning act that leads to trauma, mutilation, unwanted pregnancy and transmission of HIV among the lesbian and gay populations in countries where this act is prevalent.

While lesbian women are most frequently targeted, gay or transgendered men are also victimized.  Though common in many countries around the world such as Russia, Ecuador and many African states, corrective rape has become one of the most critical human rights issues in South Africa, which has the highest incidence of rape in the world. National reports indicate that one out of every  two women is  raped within her lifetime and the risk is much higher for lesbians.  According to a South African non-profit organization, Luleki Sizwe, every week more than ten lesbians are raped or gang-raped and it is estimated that over five hundred lesbians are victimized each year.  While this particular kind of assault is common, it is often overlooked by police and unreported by homosexual victims who fear further discrimination and abuse by officials.

Not only are the attacks violent, but they usually involve serious physical and verbal abuse.  Victims are psychologically terrorized before and during assaults, and told they are being taught a lesson on how to be a “real woman.”

In some cases, the rapes are arranged by family and community members concerned about the woman’s sexuality and marital status.  In these instances, family members forcibly confine a lesbian woman and allow her to be raped with the goal of  her becoming pregnant, in order to entrap her into a heterosexual marriage.

Not even their children are safe.  Reports indicate that lesbians’ daughters are raped with the purpose of preventing them from becoming like their homosexual mothers.

Suicide, or attempted suicide, is not uncommon among victims.  Trauma and stigma following this kind of assault has a profound impact on survivors’ well-being, sense of self, hope and security.  And trying to resolve the conflict between one’s cultural and sexual identity in a country where homosexuality is an ultimate taboo, can feel hopeless to the victim.

Sherene Farah, a social worker who assists LGBTQ  refugees, sheds some light on the complex issues surrounding the intersection of culture, sexuality, identity, and violent homophobic practices like corrective rape:

Farah:  These traumatic events deeply impact a victim’s well-being as they not only threaten their physical and psychological safety, but also harm their understanding of their sexual identity. To survive, lesbian and gay victims must continue to navigate their own cultural expectations and social contexts as LGBTQ people, while now facing the world with the experience of being raped and receiving very little support and compassion for their suffering.  These compounding factors can create a complicated web of insecurity, self-esteem issues, fear of threats and persecutions and internalized homophobia.

While South Africa is surprisingly active in protecting the rights of its LGBTQ citizens, the act of corrective rape is not yet legally recognized as a hate crime.  However in February  2012, a South African judge set a historical precedent by laying down one of the strongest jail sentences on four men convicted of stabbing and stoning 19-year-old lesbian Zoliswa Nkonyana in 2006.  This ruling provides some hope that perhaps South Africa’s LGBTQ community may begin receiving the equality they deserve.

The homophobic trend has intensified as Uganda’s President, Yoweri Museveni, has recently proposed the contentious “Kill the Gays” bill that would permit the death penalty for anyone accused of homosexuality.  Other countries such as Cameroon and Nigeria have followed Uganda’s lead and claim to be drafting similar bills.

These regressive political reforms serve to not only violate the basic human rights of individuals within the   LGBTQ  community, but also threaten to increase the risks of corrective rape for lesbian women within these countries as they create a social-political atmosphere which supports and justifies violent homophobic practices.