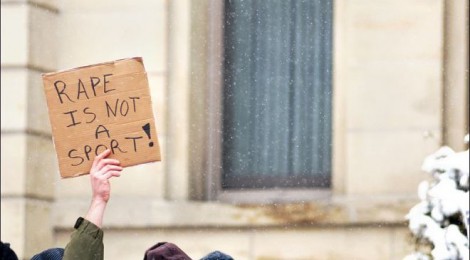 On August 11th, 2012 in Steubenville, Ohio, two high school football players kicked off the beginning of the season with a night of partying, drinking, and the sexual assault of an intoxicated 16-year old girl.

They dragged the girl, so drunk that she could not walk, from party to party.  Adding insult to horrific injury, other players watched, recorded the assault on their cell phones and even joined in.

The video was posted on various social networking sites along with rape jokes and pictures of the girl’s unconscious body.  With such evidence, one imagines the case should have been straightforward.  But not when so much rests on high school football.

Amazingly, when the victim and her parents notified the police three days after the incident, the Steubenville chief of police said it would be a challenging case as too much time had passed, evidence had been washed away, and it was too late for a toxicology report to test if she had been drugged.

All despite the pictures, video and tweets posted online. Nate Hubbard, one of the high school’s volunteer football coaches responded to the accusations, saying that “the rape was just an excuse, I think,” claiming the young girl was lying to save face in front of her parents.  None of the players who attended the parties, witnessed the events, or posted photos online have been punished; all were allowed to continue to play on the high school football team.

Hyper-masculinity, blind loyalty to team mates, physical domination and strength are a few attributes of the world’s best athletes and sports teams.  Alarmingly, 40% of all gang rapes on college campuses are committed by sports teammates.

The Steubenville, OH rape case, and another recent occurrence, the Lloyd Irvin Mixed Martial Arts case are examples of reluctance on the part of sports communities, coaches, and local authorities to acknowledge these crimes and punish those involved.

Even after the two football players involved in the Steubenville Case were convicted of sexual assault, several major media outlets sympathized with them.  CNN, for example, expressed their sadness for the “promising young men,” after they were sentenced to one year in a juvenile detention center, with little mention of the victim.

One has to wonder:  Is there something unique to the culture of high school or college athletics that facilitates sexual assault and rape?

It may be that hyper-masculine athletic values are at the core of the problem.  While hyper-masculinity may build sports champions, it is the same characteristic that, according to researcher Grant M. Johnson of Brandeis University, has a significant correlation with self reported drug-use, drinking and driving, and sexual aggression.  In a documentary by ESPN covering championship wrestling team Iowa Hawkeyes, Olympic gold medallist and assistant coach, Tom Brands, comments on one of his wrestlers’ losses matter-of-factly, saying “I don’t feel sorry for him,” as the wrestler breaks down in a hysterical cry.

Wade Davis, an NFL veteran, who is one of only seven athletes from the four major sports organizations (NFL, NBA, MLB, and NHL) to come out of the closet after retirement, said that he always “felt the pressure to consistently prove [himself], [his] masculinity and [his] sexuality.”

So too, the intense bond and sense of brotherhood that teammates develop, and which help them perform well, win games, and avoid serious injury can also carry over to gang mentally in some of the rapes committed.  According to Peggy Sanday, author of Fraternity Gang Rape, one male will initiate, or commit the assault, and others will join in, watch or record sometimes because “they get a high off [committing these crimes] with their brothers.”  Sometimes members will take part just to avoid breaking these male bonds.

And it may be that this powerful male camaraderie even plays into a sense of invulnerability or even invincibility, a sense of oneself as beyond consequence.

According to William O’Donohue on faculty at the University of Nevada, those who do not expect to experience negative outcomes and consequences of committing rape will report a greater history of sexually coercive behaviour and higher future likelihood of re-offending. When athletes are treated as though they are above the law, it makes perpetrators and other athletes more likely to offend or re-offend.  One might ask whether the idolization of athletes creates an environment where rape and sexual assault committed by these players are not considered punishable.

Can education help?  Perhaps athletes, coaches, and all those involved within the athletic arena should be educated on sexual assault, gang rape, and rape prevention.  Varsity athletes are required to complete online tests and watch videos educating them on performance enhancing drugs and alcohol, making it clear that substance abuse is inexcusable and denounced by athletic organizations.  The same consideration may be given to rape awareness.

Most of all, there needs to be accountability.  Regardless of athletic status, any athlete involved in these crimes should be suspended from play immediately and punished regardless of championship titles, scholarships, or town pride.

Only then will bystanders, team mates, and coaches think twice before turning a blind eye.