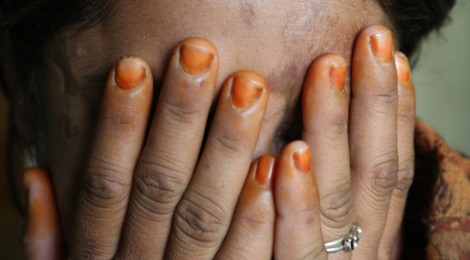 With her head bent down staring at the floor, saliva running down her chin, a woman is unable to lift her head or close her mouth.  Acid has melted her skin.

An estimated 1500 people per year are victims of acid attacks; 80% of whom are female and 40% are under the age of 18.  Although acid attacks are becoming increasingly common in countries such as India, Cambodia and Afghanistan, they occur more in Bangladesh than anywhere else in the world.

About 60 cents a bottle, acid (hydrochloric, nitric or sulfuric) has become the weapon of choice against women in countries where their rights are still limited.

In November 2012, the BBC reported a story about a 15-year old girl, attacked by her own parents because she turned her head to look at a boy passing on a motorcycle.  Claiming that she “dishonoured her family,” the parents together beat her and then poured acid over her.  After two days without being taken to a hospital, the young girl died of her injuries.

Rarely resulting in death, the horror of the attacks is nevertheless striking.  Within seconds, the acid melts skin, fat, muscle and sometimes bone.  Women may be left blind, some with sealed nostrils, shriveled ears and damage to their airway from inhaling the fumes.  In time, formed scar tissue tightens and pulls what is left on the face and neck, causing intense physical pain and discomfort. Why do the attacks occur?  Most show a common theme:  a woman stepping out of her subordinate gender role thereby causing dishonour to her husband or family.  Choices many of us make without thinking, such as rejecting a marriage proposal or a sexual advance, are enough to instigate an attack.

The violent act is a threatening message not only to the victim, but to women in general, leaving many in a permanent state of fear.

Victims are left permanently disfigured, socially isolated, and emotionally scarred.  With the end results so extreme, some have called for punishment of death for those who inflict this on others.  Yet in most cases, the perpetrator is left to carry on as if nothing happened.  Laws have been passed with jail sentences as high as 14-years.  But inefficiencies and corruption within the legal systems where these attacks occur mean that fewer than 10% of cases make it to court.

Many human rights agencies have advocated banning the sale of acid to decrease its availability.  But for those who are motivated, acid can be found; many attackers are now using the inside contents of car batteries.

Sital Kalantry, the Cornell international human rights clinical director has called the phenomenon a form of “gender terrorism.”  Unless women are able to step into a role of equality of rights and freedoms, the problem will persist.

Worldwide, many are taking action to raise awareness, provide treatment and ease pain.  The 2012 Oscar award winning documentary Saving Face, tells the stories of Pakistani women who were victims of acid attacks, and follows them through their fight for justice, through their battle to get their lives back. Featured in the film is British plastic surgeon Mohammad Jawad who has devoted countless hours to reconstructing the faces and bodies of women damaged by acid.  He is one of many who have donated their time to try and heal these women.

The Acid Survivors Foundation, established in 1999, is a non-profit organization dedicated to helping women find a place again by connecting them with treatment and rehabilitation services offered by people such as Jawad.

Still, surgeons cannot repair everyone.  For some already suffering from malnutrition, an acid attack can leave their skin almost fossilized, with scar tissue left to take over.  For those who are able to undergo surgery, it can take over 20 procedures to restore basic functioning, a process unaffordable to many already living in poverty.

In addition to the physical damage, acid attacks inflict emotional damage and can destroy hopes and dreams.  Uli Schmetzer, a Chicago Tribune foreign correspondent, told a story in 1999 of a 20-year old girl, Sufia, who became the victim of an acid attack meant for her sister who had turned down a marriage proposal.  Having been accepted into university, Sufia had plans to become an agronomist; following the attack, she was likely to end up a beggar.

Often living as social pariahs following mutilation, these women are left with little hope.  Seeing perpetrators get off without consequence, others are left to live in a state of fear that they will be next.