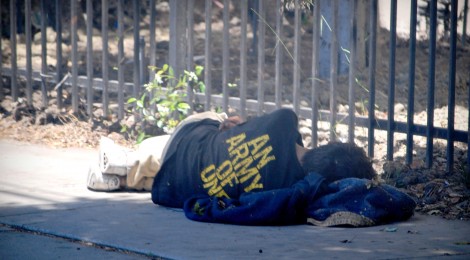 Homelessness in the USA: The Cost of Going to War?

For most of us, walking by a homeless person who is curled up on a tattered blanket, asking for spare change seems like a common enough occurrence.  Our reactions may vary, with some choosing to avoid eye contact (because it’s just plain easier), while others dig some change out of their pockets or purses.  But most of us have no idea how these people turned out like this at all.

Imagine for a moment, the many things that would have to go wrong in your life to end up in such dire straits.  You would need to lose your job, perhaps develop a debilitating illness, and most importantly, have all your family and friends turn their backs on you.

Now take that scenario, add that in recent years you have returned from the other side of the world, where you lived in extreme conditions, in constant threat of being shot at or blown up, fighting in a war for your country, returning home with lasting physical or emotional wounds.  This, for too many war veterans, is a reality.

Unfortunately, war veterans in the United States are more likely to become homeless than any other group.  A January 2009 survey in USA Today reported that 16% of war veterans end up homeless.  Furthermore, they are 50% more likely to become homeless than Americans who have not fought in a war.  In addition, individuals belonging to a minority group such as African-Americans or Hispanics are more likely to end up homeless as well.  And so, African-American and Hispanic men account for 56% of all homeless veterans even though they only account for only about 28% of the U.S. population.

So why are war veterans more likely to become homeless than other Americans?  In part, due to the long-term effects of posttraumatic stress disorder (PTSD).  Roughly 20% of war veterans return home suffering from PTSD, which can occur in people who have been exposed to life-threatening or catastrophic events such as violent crime, war or natural disasters.  Symptoms include insomnia, intense emotional reactions such as an increase in anxiety when reminded of the event, nightmares and flashbacks, a loss of interest in daily activities, and difficulty concentrating.  These symptoms can be exacerbated by previous exposure to traumatic events, a lack of family support following the trauma, family history of mental illness, and a history of childhood physical or sexual abuse.

Many PTSD symptoms are thought of as “typical” reactions to overwhelming events, but what separates a “typical” reaction from PTSD is the intensity and persistence of the symptoms; for example, they often get worse, rather than better with time.  PTSD can severely interfere with normal life functioning such as the ability to hold down a job or maintain healthy relationships with friends and family, which can result in an increased risk of homelessness.

In addition to suffering from PTSD, many in the military use drugs or alcohol in an attempt to cope with the extreme conditions they are in.  Although many stop once conditions change, others maintain their addictions even after returning home, often resulting in social problems such as alienation from friends and family, financial difficulties, and challenges finding and keeping employment.

Beyond the consequences inherent in substance abuse itself, if a soldier is caught using in certain contexts, they may face the prospect of dishonorable discharge, meaning that they get little or no support from the Department of Veterans Affairs (VA).

While a sizeable number of war veterans become homeless, as seen in the statistics cited above, most still do not.  Looking ahead, we need to better understand the factors that prevent homelessness in this group, as this can suggest ways to ameliorate the problem.  Factors such as strong family support, no history of mental illness in the family, and support from the VA (such as affordable housing and counseling) all seem to help with successful reintegration into life back home.

Although homelessness is a social ill that is not limited to the military, given the untold risks taken by those who choose to serve, there seems to be something particularly cruel about a society that lets its soldiers suffer permanently from the consequences of being a soldier in the first place.  We ask those who serve to give up a lot, we shouldn’t be asking them to give up their futures as well.