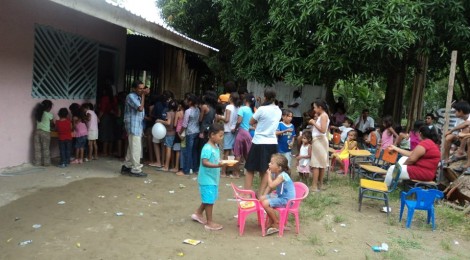 It Takes a Village: A Community Cares for their Young

Over the years I have heard it said that “it takes a village to raise a child,” but I don’t think I ever understood what this meant.  In many North American cities we barely know our next door neighbours let alone members of our community.  How can people outside the family possibly play a central role in upbringing?  This past August, however, I had the opportunity to gain some perspective when I traveled with a group of volunteers to Tres de Mayo, a small community near Tela, Honduras to help renovate a community centre.  During my time there I learned many things, how to dig a trench, how to wash my clothes in a river, and perhaps most important, the role of community in the life of a child.

During my stay in Tres de Mayo I had plenty of opportunity to interact and work with local children, and I often could not help but think about the hardships they faced day to day:  poverty, limited access to education, separation from one or both parents, all factors considered to place children at-risk for problems later in life.

One young boy in particular, Javier, stood out for me.  Javier was very enthusiastic and outgoing, and at the age of eleven, was always quick to lend a hand at the work site.  Of all the children, Javier seemed to be the one most excited by our presence in Tres de Mayo.  He would come by our house every afternoon after we finished work to play soccer or card games, or to just hang out with us and ask questions, although this was difficult because most of us spoke little Spanish.

As I came to know Javier I realized that he faced a number of challenges that put him at-risk.  His father had left a year earlier for the U.S., and the family had not heard from him since.  This put his mother in a difficult position, stay in Tres de Mayo with no job and no source of income, or go find work elsewhere.  In the end she decided to move to another province to find work, but unfortunately could not afford to take all four children with her.  Javier being the oldest had to stay behind with his eight-year-old brother Miguel, to live with their grandfather and seventeen others in a small house.

Many of the children we met in Tres de Mayo were in similar situations, living in poverty, separated from a primary caregiver; factors that increase their probability for adverse mental health outcomes in adulthood.  Still, the community these children were growing up in provided them with something important, something that may have helped foster resilience.

The people of Tres de Mayo had a strong sense of community. This was perhaps best exemplified by the way they came together to build the community centre.  The centre was designed to be a safe place for the children, with classrooms where they could learn, a playground where they could play, and a kitchen where they could eat lunch.  It was also a place for the adults to attend classes in the evening, and a place to gather and celebrate important events. The children tried their best to help out with the construction, and the building of this centre served as an important opportunity for them to learn from the adults.  Javier was perhaps the most eager to help, seeming particularly keen even though his father was not there.  The adult men served as mentors for Javier, working with him, answering his questions, teaching him how to build in more efficient ways.

As our last day approached, I knew it would be difficult to say goodbye to all the children, but I didn’t realize how difficult it would be for them to say goodbye to us.  I remember the look in Javier’s eyes, as they welled up with tears when we told him we were leaving.  One of the volunteers held him close, but it did little to console him.  He had already experienced so much loss, his father abandoning him, his mother leaving to find work, and it was hard to realize that our departure was adding to the list.

As I looked beyond Javier, I could see the many men and women whom Javier looked up to, depended on, and gathered strength from, and I told myself that he would be okay, not knowing if that was true or if I was just reassuring myself.  But I did know that without parents to raise him, he was not left alone, to falter with no one to care for him.

Instead, the adults in the community took responsibility for the care of their collective young.  And that is a lesson for which this North American is truly grateful.

← Culture and PTSD: Lessons from the 2004 Tsunami
Sensorimotor Psychotherapy: A Somatic Path to Trauma Treatment →