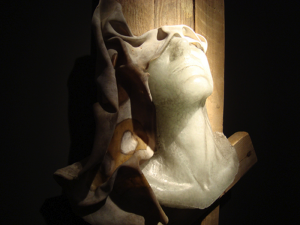 Mira Maylor, an Israeli artist, uses glass sculpture transposed with materials such as wood, metal, and leather to comment on the rich history of Israel, political climate, and biblical covenant. A series of four pieces, The Numbered Figures, holds religious symbolism as well as historic reference. Glass casts of human faces are partially covered by cowhide. Upon closer inspection, the branded numbers on the cowhide are visible. This branded number on the skin is not only evidence of the previous life (sacred skin used often in Jewish ceremonies) but also tributary of the way Jews were branded in the Second World War. Each piece is mounted from an array of humble wooden planks that recall a crucifixion motif.