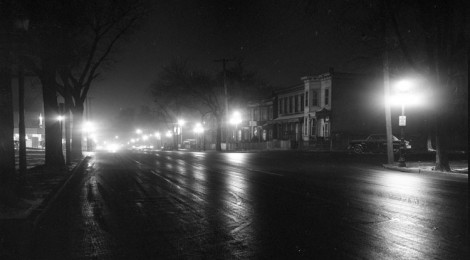 Acquainted with the Night

I have been one acquainted with the night.
I have walked out in rain — and back in rain.
I have outwalked the furthest city light.

I have looked down the saddest city lane.
I have passed by the watchman on his beat
And dropped my eyes, unwilling to explain.

I have stood still and stopped the sound of feet
When far away an interrupted cry
Came over houses from another street,

But not to call me back or say good-bye;
And further still at an unearthly height,
A luminary clock against the sky

Proclaimed the time was neither wrong nor right.
I have been one acquainted with the night. Robert Frost
Robert Frost’s personal life was plagued with grief and loss. In 1885 when Frost was 11, his father died of tuberculosis, leaving the family with just eight dollars. Frost’s mother died of cancer in 1900. In 1920, Frost had to commit his younger sister Jeanie to a mental hospital, where she died nine years later. Mental illness apparently ran in Frost’s family, as both he and his mother suffered from depression, and his daughter Irma was committed to a mental hospital in 1947. Frost’s wife, Elinor, also experienced bouts of depression.
Tags: art, culture, depression, Poetry, Robert Frost, words
← The Fragmented Child: Disorganized Attachment and Dissociation
Little Criminals: Treatment Remains Elusive for Youth Sexual Offenders →