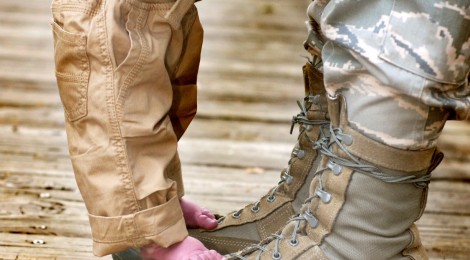 “It’s hard, but I think it must be harder for my husband, being away for so long.  He missed a lot of firsts when the girls were babies.  Thankfully, between deployments he got to see with one, the things he missed with the other.”

Blair Johnson, mother of two, Mackenzie age 5, and Macey age 2, has experienced firsthand the hardships of having a spouse away on deployment, as her husband Nathan, an American marine, has spent half of their marriage overseas and in training.

Deployment, the movement of troops overseas for military action, is the reality of many families in the U.S. and Canada.  The American military is deployed in more than 150 countries around the world, with the majority of troops in combat zones.

Deployed soldiers often face great emotional strain as they are forced to separate from their spouses and children.  The separation, distance, and heartache make parenting in these families an enormous challenge.  Children, who tend to be most sensitive to changes within the family, may react strongly.

“For me, it has been harder with my older daughter during Nathan’s most recent deployment.  Since she is such a Daddy’s girl, she acted out a lot in trying to deal with her father being away.  She would give me a hard time, almost like she thought I could control whether or not her Dad was home.”

Amy Drummet, a researcher at the University of Missouri explains that military families experience stress at three main junctions:  relocation, separation, and reunion.  As Blair recalls, separations bring on feelings of parental inadequacy and guilt.  “It’s the feeling that I can’t give my girls everything they need when it’s just me; they miss their Dad and I can’t do anything to bring him home.”

To complicate matters, the return home can be just as problematic.  “The last time he came back was different than the previous ones.  It took a lot longer for everything to return to normal.  Jumping back into the role of a full-time father was harder for him.” One in every five soldiers returning home from Iraq or Afghanistan may suffer from posttraumatic stress disorder (PTSD).  This prevalence makes it difficult for the returning parent to carry on normal parenting responsibilities.  “When Nathan returned, he was very jumpy, angry, and agitated with every loud sound he heard.  He would constantly reach for his gun even though he didn’t even have it once he returned home.  He had to learn to let go of the defense mode he was used to.”

Coming home presents many obstacles the family must overcome in order to settle back into a normal and familiar way of living.   Apart from the joy of having one’s partner return home, there is plenty of work that must be done to adapt to previous family roles.

“The girls hold a lot of anger towards me after he is home and it is heart breaking; they don’t want anything to do with me for the most part.  Since I am the main disciplinarian the majority of the time, they see him as the good guy.  They want to spend every moment with him when he is around, because they just miss him so much when he’s gone.”

“I have been blessed to have parents with whom we can stay during his deployments.  For us, it helped a bit in filling the void of Daddy being gone.  We take advantage of the time we can spend together, so all the family can be a part in their lives,” says Blair.

Military children are especially vulnerable during a deployment due to separation from their parent, a perceived sense of danger, and an increased sense of uncertainty.

“I asked Mackenzie what she thought Daddy was doing when he is deployed and she said, ‘he is working…and fighting the bad guys’.”

Despite the difficulties, Blair insists that there are good aspects to deployment, “You have to make a choice to either let it affect you in a bad way or a good one.  You can use that time to grow closer instead of growing distant.  It is all a matter of choice.  I believe something good can come from any situation, no matter how terrible it is.  It makes you a stronger person and it helps you realize just how much you can handle.”

Deployment drastically affects family life.  While it requires all family members to readjust, children, who are more prone to being agitated by their changing circumstances, may find it harder to cope.  As parents battle their own issues and uncertainties, they may unintentionally miss signs that their children need them.

So deployment may have an effect on the attachment with not only the deployed parent, but also with the parent who stays behind.  The confusion and uncertainty experienced by children should be treated with love and understanding, while maintaining their normal routine.

“Parents have their bad days, but it’s important to cry, let it all out, and then move on.  Happiness is an everyday choice, and choosing it doesn’t mean you miss your spouse any less.”

← The Globe of London
My Sad Self →