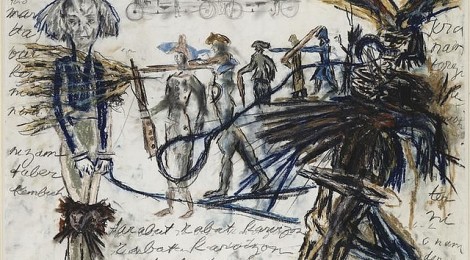 A Poem: The Psychiatric Asylum

Antonin Artaud was a playwright, actor, poet, director, and theorist of the dramatic arts. Artaud experienced a number of psychotic episodes at the age of 41, and went on to spend about 15 of his 52 years in psychiatric institutions. Despite his mental and physical afflictions (hereditary syphilis, meningitis, chronic headaches), Artaud was nevertheless incredibly productive in his creative and theoretical work. Below is a poem created by Artaud whilst in a psychiatric asylum. It is at moments rather crude—this seems only a natural consequence, however, given the context and experience which it is reflective of.

A work like this demonstrates the creative impulse exercising its utility in aiding one to cope and to articulate their psychological experiences.

There is a Hole in things

and cannot be understood as part of a system.

The noise in the head is an ache.
Doubt gives birth to invention

which sodomizes it from behind.

These beings do not exist

and yet they continue to provoke Artaud.

There are no questions or problems

worth the blood from a dirty needle

is just this stink

from the anus of a God

who is against Life.

Best to give it up.
Don’t want anyone

don’t need to be surprised or astonished.

I, Artaud, have had enough of this incessant pollution

of my vital substance by spectral intelligences

that resist being nailed down,

which let loose a battalion of craven ghosts

THAT DO NOT EXIST
It’s just the laundry of human toil:
hope,
despair,
fear of death.
And the defecations of Science:
mass,
density,
time,
space.
Fuck these bourgeois values.

It’s a fools game no grail no end to suffering

and that’s nothing new.

The eye flickers before God

and then closes for good.

It’s just too much when you get that near

the rim of the pit,

your face smeared with shit for leaning too close.
God is this clot of black blood in the anus,

It makes me sick to think.

I rage against the obscenity of God

whose pure spirit is the light of Satan.