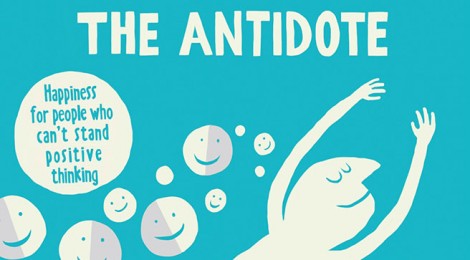 Since the rise of Positive Psychology in the late 1990s, the quest for happiness has become a quasi epidemic.  Motivational speakers ask that we eliminate the words ‘no’ and ‘impossible’ from our vocabulary, while various psychotherapies suggest we learn to take focus away from our anxieties and replace them with optimistic thoughts.

Some think that to achieve happiness, we must eliminate all negativity and anxiety from our minds; a task many would find challenging or even impossible. In Oliver Burkeman’s new book The Antidote: Happiness for People Who Can’t Stand Positive Thinking, the ineffectiveness of modern strategies for happiness is only part of the problem.  For Burkeman, “there are reasons to believe that the whole notion of seeking happiness is flawed to begin with.  For one thing, who says happiness is a valid goal in the first place?”

Burkeman approaches “the cult of optimism” with skepticism.  Eliminating negative thought is not only impossible, but also unnatural.  Our efforts to suppress certain thoughts or behaviours are much more likely to evoke them.  If you were told to not think about a white bear for a minute, could you?

Research by Canadian psychologist, Joanne Wood, has shown that individuals who spend time reciting positive affirmations that do not resonate with their internal state become more distressed.

While Burkeman acknowledges that we like hearing positive messages about ourselves, he explains that it is more beneficial that we maintain a coherent and consistent sense of self.  The research shows that for people with low self-esteem, messages like mantras are unsettling, and usually are rejected as they conflict with one’s sense of self.

For Burkeman and many others he interviews, happiness is not about suppressing anxiety, but about observing and experiencing it as a natural, necessary, and transient sensation.

Tracing the practice of immersing oneself in thoughts of the anxious worst-case scenario back to the Stoic philosophers, Burkeman suggests not forcing positivity, but taking ‘the negative path’ instead.

While negative can refer to unpleasant experiences and emotions, the philosophies of happiness he discusses are best thought of as ‘negative’ since they involve practicing skills of ‘not doing.’  In this approach, you learn not to chase positive feelings so aggressively.  He argues that the negative path is “not so much a path at all, but a shift in perspective that urges you to detach from a strict set of ideals and thought patterns.”

Through conversations with various contemporaries, like new age thinker Eckhart Tolle, and experts in goal setting, he outlines how accepting uncertainty and failure as a natural part of life allows the individual to enjoy the journey rather than worry about reaching the desired happiness destination.

Burkeman is not one to shy away from experimentation.  He chronicles the process of his negative path and provides an intimate look into his own anxieties and discomfort.  He attends motivational seminars, sits in Vipassana silence for 10 days, travels to the slums of Nairobi, experiences Mexican death ceremonies and challenges his own views of self and identity. What Burkeman offers, in part, is a lighthearted and valuable theory of balance.  His exploration not only highlights various understandings of happiness but also the roadblocks we encounter when we immerse ourselves too deeply in the oversimplified dichotomies of happiness and unhappiness.

While Burkeman’s writing can come across as overly cynical in tone, his book is a reminder that leaning too far towards one school of thought may be as detrimental as it may be rewarding.

His wit, combined with the thoroughness of his research, makes for an enlightening read, one that may shift the way you view yourself and others.