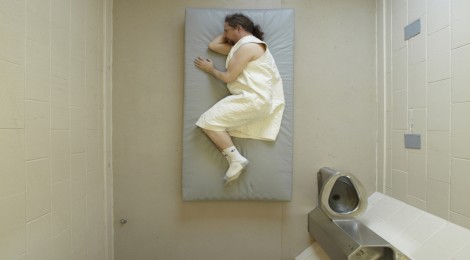 “He looked like a passive type person, living in his own world… there had to be something wrong with him, but I never thought he would resort to this type of violence.” – Shawn White, Detective Staff Sergeant, Cornwall Police

In a stark opening, we meet Sean Cliffton attempting to step off a curb and cross the street in downtown Brockville, Ontario.  Wild haired in mismatched denim, he carefully shuffles his feet closer to the edge.  He steps down with one foot, places the other next to it, and pauses.  Slowly turning around, he steps back onto the curb, shuffles back the small distance to where he started, and begins the ritual over again. Screened November 19th, 2013 at the Bloor Hot Docs Cinema, the documentary NCR: Not Criminally Responsible has been shown multiple times this year due to its notable popularity.   Focusing on the experience of Sean Cliffton, a forensic psychiatric patient at the Brockville Mental Health Centre, and his victim, Julie Bouvier, the documentary has been described in recent press as “illuminating,” “controversial,” and “disturbing.”

The film is a humanizing piece.   In contrast to the popular and exploitative “true crime stories” on television, this documentary takes a different approach, showing the reality behind the sensational events.  Director John Kastner brings us inside the story of Sean Cliffton and Julie Bouvier and how one night changed their lives forever.

“The devil told him to stab the prettiest girl he saw.”

Cliffton’s victim, a 22 year old woman from Cornwall, Ontario was out for an evening of shopping with some friends.  Stopping at a Walmart, Julie Bouvier planned to run inside to pick up a few things.  Cliffton had been at the store for some time, experiencing severe violent delusions that became overwhelming.  When Julie approached the front entrance, Sean attacked, stabbing her six times before dropping the knife.  Described as being “in a trance,” he remained at the scene until police arrived and arrested him.

“A completely random act of violence.”

Sean was well known in his hometown of Cornwall because of the bizarre behaviours he often displayed, though he was never reported to be violent or aggressive.  When he was arrested, it was apparent that this was going to be a very different kind of case.

The psychiatrists involved testified that Cliffton did not have the state of mind to form mens rea (criminal intent).  As a result, he was found not criminally responsible (NCR) and was sentenced to reside at the Brockville Mental Health Centre in Brockville, Ontario.

Early in the film we are introduced to Dr. A. G. Ahmed who presents Cliffton’s particularly complex case – a dual diagnosis of obsessive compulsive disorder (OCD) and paranoid schizophrenia.  When he was admitted, psychiatric nurse Charles DeCou stated that Sean had the worst case of OCD he had ever seen.  Kastner’s filmmaking adeptly conveys this as we are shown several minutes of Sean’s excruciating rituals, which drag on relentlessly and create a sense of voyeuristic discomfort.

The dual perspective from which the story unfolds is both illuminating and heart wrenching as it shows how both victim and perpetrator navigated the murky waters of this tragedy.  This is not just a film about Sean’s horrific crime and how he was dealt with in the court system, and it doesn’t just focus on Julie’s courageous battle for life and recovery.  It is a film that captures it all.

The film’s dual perspective shows the evolution of the two characters over time.  In doing so, Kastner tells a compelling story.  Sean is first presented as peculiar, withdrawn and a slave to his compulsions.  Julie puts up a brave front that does not quite conceal her fear, anger, and sadness.

We are shown their slow progression.  Sean grows from the wild haired man in a padded cell to a person living in his own apartment, working towards being granted full parole.  We get to know his quirky and cheeky sense of humor.  Most important, we learn of his goal:  to meet the Bouvier family in person and apologize. Julie grows from a woman fearing for her safety, to a woman ultimately able to accept Sean’s apology.  Initially filmed in partial seclusion, we are finally shown Julie’s full face as she describes why she isn’t scared anymore.  She understands his remorse, “that it was random, and that he was sick.”

Kastner strips away the sensationalism of a tragic story, and humanizes both individuals involved.  We learn not to look at the “monster” that is Sean Cliffton, but to see the person behind the mental illness.  Given the severity of the crime, that is an achievement indeed.

← Skeleton In The Closet
Graceless →