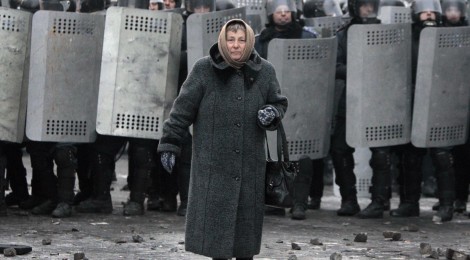 My grandfather lives in Kiev, Ukraine. As regional conflicts continue to unfold there in the aftermath of the February 2014 revolution, he and other senior citizens are affected disproportionately as old wounds resurface, and many relive fears and traumas.

By age sixty-five, 70-90% of people will experience at least one traumatic event, and the incidence of PTSD increases with age. Among Ukrainian seniors, the prevalence of both traumatic events and PTSD is even greater. Many lost parents to the second world war, or served in it; and all lived through the fall of the Soviet Union. The trauma of war and economic discord has impacted Ukrainian seniors’ sense of identity and has created deep-rooted fear of change. My grandfather recently spoke with me about how the political upheaval has impacted his life.

“I was scared to go out when it began. There were people running and screaming in the streets. I couldn’t get food because they had put mines around the subway.”

“When I looked outside and saw the protests –saw the violence– it was painful. It looked like people were going to war. I was a boy when my father went to war, and I was a young man when he came back. But I’ll never forget the stories he told, or how his own government failed to provide for him after he had given everything for them. Each time I look outside these days, when I see the people in uniforms, or the people cheering as buildings burn, I remember the war.”

Since February 2014, the Ukrainian revolution has cost at least 75 people their lives. Many others –on both sides– have been injured and lost their livelihoods.

“I couldn’t check on my friends and neighbours. All the police were downtown and people who didn’t care about the politics used the opportunity to steal from regular civilians. After the initial violence stopped, we thought things would start getting back to normal. But that didn’t happen. Many of my friends have grown estranged from their children and families because everyone has different opinions on which side is right.”

Much of the discord among families stems from a lack of understanding between generations. Younger Ukrainians don’t share the fears and doubts of their parents. They are eager for change and willing to take risks. Older generations have seen how revolutions can make things worse.

The revolution has also impacted financial stability and sense of security. Many seniors find themselves isolated from their social supports and are fearful of losing their personal identities as Ukrainians. I understand what corrupt leaders can do to a country. I saw the USSR crumble from a great power into nothing. Today’s generation is angry at the politicians, so they want to throw them out. But they don’t know what happens when there are no politicians left –when there is no country left and you don’t know who you are. I have lived through that. That is something to fear.”

The revolution has hit Ukrainian seniors on two fronts –by throwing into question their stability and identity, and by taking from them their loved ones and social supports, which are vital for combatting PTSD. As clinical psychologist Eve Davidson and colleagues from Boston University have pointed out, PTSD often has a delayed onset, and many sufferers do not show overt symptoms until they re-experience their trauma.

Such may be the case in the Ukraine, where many seniors struggled to cope with their past trauma, but may be losing their resolve by being forced to relive it once more.

← Shrinking Women
You Are Beautiful →