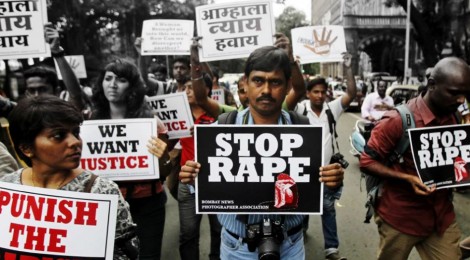 “My name is Will, and I think rape is hilarious…when it happens to a dude,” begins the monologue in a recently posted video written and performed by actor, Andrew Bailey. In this powerful mostly-satirical piece, Bailey opens discussion about how male sexual assaults are brushed off. “A male can’t be raped because he must have wanted it.”

Rape can and does happen to men. Approximately 1 in 6 men have experienced some form of sexual abuse as children, and 1 in 33 American men are reportedly survivors of attempted or completed rape. And these statistics are likely an under-representation. According to RAINN, an anti-sexual violence organization, about 60% of all sexual assaults are not reported to police.

Although women are more likely to be sexually assaulted, Western notion of masculinity and gender have made it difficult to view men as victims of abuse. Men are often expected to welcome sexual advances, not view them as unwanted, rendering them less able to identify a sexual assault when it occurs to them.

“Male survivors may be less likely to identify what happened to them as abuse or assault because of the general idea that men always want sex,” Jennifer Marsh, the vice president for Victim Services at RAINN told CNN.

A further challenge is the widely-held view that physical strength makes men incapable of being overpowered or assaulted. James Landrith, a sexual assault survivor, spoke to CNN: “We [men] are conditioned to believe that we cannot be victimized.”

But, a research study led by Janice Du Mont from the University of Toronto, reported that male victims are often drugged prior to assault. While the assailant is usually male, female aggressors who violently sexually abuse male victims are not uncommon.

After an assault, the victim often feels troubled by his inability to protect himself, questioning his masculinity, feeling that a sense of control has been taken from him. They may also feel ashamed about the incident, making them reluctant to speak out. In fact, 71% of adult sexual assault survivors hold the view that “nobody would believe me” as a reason for not reporting the incident.

Many report receiving little to no support from family and friends, as they often fear disclosing the abuse. In an interview with the Department of Justice Canada, a male sexual assault victim recounts, “no one knew about it, so I just felt very alone, and I didn’t communicate any of that.”

“All the guys would laugh at me about it,” Bailey says in his monologue. Uncomfortable disclosing the reality of the experience, Bailey’s character gives in to rape humour, to fit in with friends. “I was like ‘psych’, I totally did enjoy it; then they high-fived me and told me I was cool.” Indeed, it is not unusual for male victims to fear rejection and harassment from others. Many keep silent.

Raising awareness and encouraging male survivors to reach out for support may be challenging, but education regarding sexual abuse and demystifying misconceptions surrounding rape is essential to help male survivors heal. In research by the Department of Justice Canada, survivors suggested raising awareness through campaigns to better inform male survivors about available resources.

Duncan Craig of Survivors Manchester, a survivor-led/survivor-run organization states, “In the future I would like to see both the government and society begin talking more openly about boys and men as victims and see us trying to make a positive change to pulling down those barriers that stop boys and men from speaking up.”

← That Crazed Girl
If You Are in a Shell →