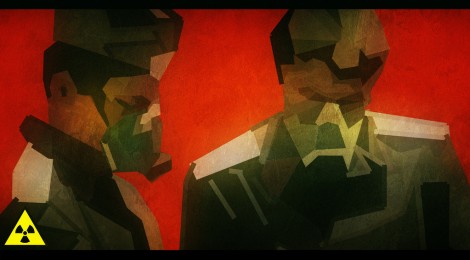 Chad Gracia’s award-winning 2015 documentary, The Russian Woodpecker, addresses the legacy of trauma caused by the Chernobyl nuclear disaster. The film documents the investigative journey of Fedor Alexandrovich, a Kiev based artist who shares his own experience as a survivor while exploring the disturbing question: Was the disaster at the Chernobyl power plant an ‘inside job’?

When a reactor at the power plant exploded on April 26th, 1986, the effects were catastrophic. As radiation levels rose, hundreds of thousands of people were evacuated from their homes in Ukraine, Belarus, and Russia.

Forced evacuation and relocation was traumatic for many who had no hope of returning home. In the most contaminated areas, entire villages were bulldozed and buried. Further, citizens were not notified of the risks they faced from radiation. Tamara Kovalchuk, who was employed by the Chernobyl power plant, tells Alexandrovich in the film:

“When the explosion happened, no one thought anything of it. They put on masks and we were surprised. Why wear a mask in such good weather?”

After the event, political authorities failed to implement policies to protect the health of their citizens. For example, the World Health Organization claims that:

“If people had stopped giving locally supplied contaminated milk to children for a few months following the accident, it is likely that most of the increase in radiation-induced thyroid cancer would not have resulted.” Trauma is a recurrent theme of The Russian Woodpecker. Alexandrovich was four years old at the time of the disaster—he was evacuated from Kiev, Ukraine, separated from his parents, and sent to an orphanage. Reflecting on this experience, he says, “I thought I would be there forever. It’s quite a serious trauma for a child. And from that time I’ve felt strange…different.”

But this trauma is not unique to Alexandrovich—it extends to the hundreds of thousands of people who faced relocation, suffered from illness, and coped with deliberate misinformation from their government about health risks. To this day, those affected by the explosion continue to struggle, living in fear of long-lasting consequences such as birth defects and contaminated foods.

According to psychologist Lynn Barnett, trauma from the Chernobyl disaster is cumulative because it is “characterized by repeated adversity with no foreseeable end”. She describes radiation as an “unseen, unheard, unfelt and ‘un-smelt’ terror.” Its elusiveness, in conjunction with government deception following the event, has led to the spread of misinformation guided by unscientific explanations and recommendations for coping with radiation.

One such recommendation is that small doses of radiation are good for people of middle or old age. Others are that drinking red wine, or swabbing the throat with antiseptic iodine, can protect against radiation. But maybe false beliefs like these lessen the threat of the unknown by providing a sense of control.

Other research corroborates this notion. Anthropologist Richard Sosis at the University of Connecticut studied the effects of psalm recitation during the Second Palestinian Intifada in northern Israel. Among secular women, those who recited psalms to cope with violence experienced lower anxiety.

In relation to the Chernobyl disaster, Barnett wrote:

“The secrecy and lies that enshrouded the Chernobyl accident led to an almost total lack of knowledge about the facts, leading to the impossibility of any kind of personal control.” Perhaps Alexandrovich was seeking control over the chaos inflicted by the event when he decided to look into the politics surrounding the disaster.

His inquiry led him to interview Vladimir Komarov, head of the Chernobyl investigation committee. This committee was tasked with identifying the cause of the explosion. In the film, Komarov tells Alexandrovich that the last Soviet Head of Atomic Energy, Georgy Kopchinski, made phone calls to Chernobyl engineers demanding that they conduct experiments on an unstable nuclear reactor.

Kopchinski, who Alexandrovich also interviews, denies that he made these phone calls, despite the fact that they were reported by engineers at the time.

Like trauma that affects the individual, politically motivated trauma leaves people with a sense of vulnerability and fragility. In traumatic events, key values, beliefs, and attitudes are largely compromised, and individuals turn to external sources of authority, such as political figures, for answers.

But when political figures are complicit in the trauma, or fail to perform their leadership duties, basic trust in one’s society and culture is challenged, and the ability to cope is further hindered.

Alexandrovich’s theory that the Chernobyl disaster was politically motivated is provocative and incendiary. But is it true? According to Chernobyl historian Natalia Baranovskaya, “To prove this you need all the documents. But the documents are still classified.”

Secrecy around the events of the Chernobyl disaster persist, preventing those affected from understanding the cause of their suffering. For now, the truth remains elusive.