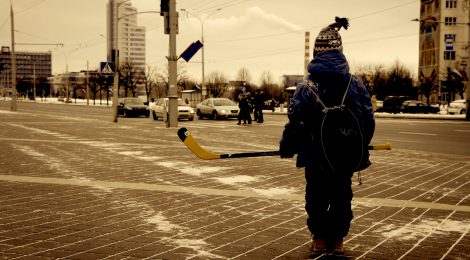 On December 19, 2015, former National Hockey League (NHL) player Patrick O’Sullivan revealed shocking details of sports-related childhood abuse. In a blog article on The Players Tribune, he disclosed that his father began abusing him at 5 years old when he got his first pair of hockey skates.

“It would start as soon as we got in the car, and sometimes right out in the parking lot.”

He reveals that his father would put out cigarettes on his skin, choke him, and throw objects at him. At times, he endured whippings with a jump rope or an electrical cord.

“As twisted and insane as it sounds, in his mind, the abuse was justified. It was all going to make me a better hockey player—and eventually get me to the NHL.”

The more goals Patrick scored, the more the abuse intensified.

Patrick’s father assumed that these harsh disciplinary practices would enhance his abilities and success, but experts say otherwise. The scars of childhood abuse have a lasting negative impact. John O’Sullivan (no relation to Patrick), a former soccer player, coach, and founder of the Changing the Game Project, says this parenting behaviour burdens the child, hindering performance.

In an article on the Changing the Game Project website, John writes:

“If a child believes that a parent’s love is tied to the expectation of winning, and he does not win, he may believe that he is less loved or valued. This creates anxiety and inhibits performance.”

Childhood maltreatment leads to decreased mental and physical health, even decades after the abuse. Rutgers sociology professor Kristen Springer and colleagues reported that, in their population based survey, physical symptoms and illnesses, like hypertension and cardiac problems, were present in those who experienced childhood abuse years earlier. And childhood maltreatment is also associated with increased anxiety, anger, and depression—symptoms that can be heavily detrimental to an athlete’s performance.

Some studies also show that early childhood maltreatment, such as the abuse endured by Patrick, shape aspects of socio-emotional development in adolescence and adulthood. A study conducted by Pan Chen and colleagues at the University of Chicago supported the relationship between childhood abuse and aggressive behaviour in adulthood. The researchers note that early trauma may increase impulsive behaviour and lashing out in abuse survivors.

But some, like Patrick, seek help. He says in an interview with ESPN, “…I have put the money and time into my own health.”

He acknowledges that not everyone has the opportunity to find the help they need—especially as an athlete:

“Players don’t feel like they can say anything because it’s a huge red flag. You say you need to see a psychologist and you’ll get a call from your agent saying he spoke to the General Manager of the team and wants to know what your ‘problem’ is.” In addition to how isolating the experience of abuse can be for professional athletes and adults, Patrick emphasizes how helpless and frightening it can be for a child. He describes his own feelings of disempowerment, at the age of ten: “I just tried to survive. Each morning, I’d wake up and think: Here we go again. Just get through it.”

It didn’t help that others turned a blind eye. Patrick says that parents and coaches would catch a glimpse of the abuse, but no one stepped in. Bystanders may feel hesitant to intervene, out of fear of being wrong. But he counters, “If you are wrong, that’s the absolute best case scenario.” He hopes his story will raise awareness about childhood abuse in young athletes.

As for parents, soccer coach John O’Sullivan says that empowerment may be key to promoting competitive success, instead of harsh discipline and criticism. “The best players play with freedom, they play without fear and they are not afraid of making errors, they can play up to their potential,” he says in an interview with Kids in The House.

← Art and Schizophrenia
The Needle and the Damage Done →