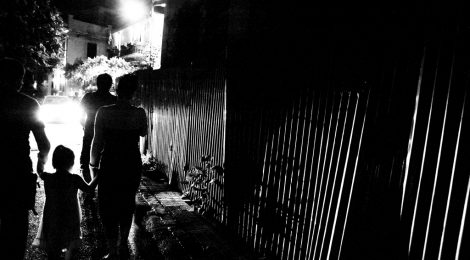 “My aunt woke me to say that my mom sent a text to the family priest in the middle of the night, asking for prayers after taking a bunch of pills.”

Diagnosed with clinical depression, Keith Reid-Cleveland’s mother had a long, painful history of suicide attempts, feeling unhappy and tired much of the time. Like many children, he felt helpless and didn’t understand depression, thinking her fatigue was from hard work, and that his mother just needed sleep.

As Reid-Cleveland grew up, he began to take notice of his mother’s mood, making it his responsibility to try to make her smile:

“At first, this just entailed telling her ‘I love you’ every time I saw her. Eventually, it morphed into me acting as sort of a motivational life coach/stand-up comic.”

After his mother’s first hospitalization:

“I did Desi Arnaz impressions to make her laugh…”

He also gave her emotional support:

“I sat down and unpacked what was bothering her step-by-step, until she realized it wasn’t as devastating as she’d thought.”

The Canadian Mental Health Association (CMHA) estimates that 8% of adults will experience major depression at some point in their lives. About 4000 Canadians die each year by suicide, making it the second leading cause of death for those between ages 15 and 34.

Parental suicide and hospitalization have a tremendous impact on children.

To better understand this traumatic experience, researchers Hanna Van Parys and Peter Rober, from the University of Leuven in Belgium, conducted interviews with children between ages 7 and 14 who had a parent hospitalized for major depression. Many children showed sensitivity to the parent’s distress. Like Reid-Cleveland, some reported awareness of parental fatigue or lack of energy. Others picked up on mood changes, such as when the parent was feeling angry or sad. And some reported feeling guilty for being a burden.

Eleven-year-old Yellow expressed to his father: “If you would like me to be somewhere else sometimes, just tell me.”

Others sought ways to convey to their parents that they were not affected by their mental health, attempting to elevate mom’s or dad’s mood. Van Parys and Rober consider this behaviour common for children seeing a parent in distress. In their study, a child named Kamiel was asked whether he would like to solve problems for his mother, to which he responded: “Yes, sometimes, if that would be possible,” while hugging her closely.

When his mother was first hospitalized for a suicide attempt, Reid-Cleveland’s loved ones decided he shouldn’t see her. Recalling similar situations of parental hospitalization, child interviewees reported much distress and worry about the parent. Many felt alone, powerless, unable to help. One girl expressed existential fear, stating: “Then I think about when you will die, everything will be different when you die.” Seeing a parent in the hospital forces the child to imagine life without them.

Research shows that children of parents who attempt suicide are at higher risk to do the same. And in a study conducted at the Aarhus University in Denmark, researchers found an increased long-term risk of suicide in children who experienced parental death in childhood, increasing suicide risk for up to 25 years following the traumatic experience.

Like Reid-Cleveland, many children living with parent mental illness feel isolated and helpless. Van Parys and Rober note that prevention programs focusing on family communication are beneficial to enhance family resilience, and to lessen the burden on the child.