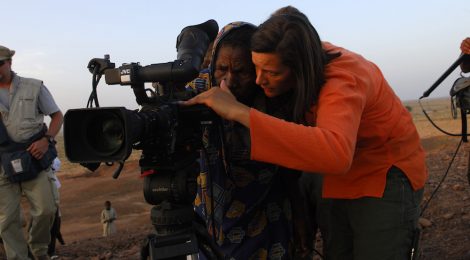 Coping Through the Lens of a Camera

Documentaries tell compelling stories. But while we become captivated by moments on screen, we forget there is someone behind the camera, watching events unfold in real-time. Cameraperson, a recently released documentary by Kirsten Johnson, portrays her experiences filming documentaries, and it includes footage captured while traveling and filming. Johnson has travelled the world – from the United States, to South America, to Europe – filming documentaries on topics such as America’s hunger problem or a notorious FBI burglary. She worked on Citizen Four, a documentary about a former CIA agent leaking government information. Sometimes, the stories are about traumatic historical events such as the Rwandan Genocide and the Bosnian War. She has visited the sites of mass killings and heard the stories of people who have survived tragedies.

I had the opportunity to speak with Johnson, and learn about her experiences. Born in Seattle, she was always curious about the world and wanted to travel. She describes herself as a “visual person.” And as the daughter of a psychiatrist, she always wondered about the unique experiences of others. Her personal background, along with an interest in political inequalities, led her to pursue a career in documentary filmmaking.

In an interview with the Trauma and Mental Health Report, Johnson explains why she followed this path:

“As a doc filmmaker you’re trying to help reveal a human rights injustice, or a problem that people haven’t looked at or paid attention to, and you know people don’t want to hear it. People don’t want to watch a film about rape in Bosnia. Then the question is, how do you find a way for people to look at things they don’t want to look at?”

I asked Johnson about one of her first jobs filming documentaries:

“I filmed over 200 interviews with holocaust survivors, it was one of the first experiences I had in filmmaking and being deeply interested in how people tell the stories of their trauma. I got interested in the stories themselves, and how people remember them because some people remember different aspects. What I found surprising was that over half the people I interviewed had never talked to anyone about it before—this was the first time they had ever talked about it. There was just a curiosity in me, how could it be that somebody experienced something so devastating and never spoke of it?”

Many filmmakers have likely had similar experiences, so I was curious if Johnson had ever shared her experiences with other people in the industry:

“As camera people, we work so much we rarely get the chance to talk together. I have always talked a great deal with the people who I film with as they’re listening and I’m watching. We process our experience together. Or the translators, those are the kinds of people I’ve had deep conversations about things we were witnessing together.”

Johnson described some of the unspeakable events she had witnessed, and how she copes with the trauma while still doing her work: “There’s often an aesthetic pleasure even though you may be filming a terrible moment—somehow, the light, the fabric, their skin, what they are wearing, helps you as the camera person cope with the things you are taking in. That’s what I realized when I was looking back at my own footage. It’s this active creative process you’re involved with when you’re trying to organize it and see it differently and search for the beauty in it.”

She described one such experience with a Bosnian family:

“We were filming about how rape was a weapon during the Bosnian war and listening to horrible stories about people who had to leave their homes. Being with one of the few families who had returned to their home—it was beautiful to witness that.”

When asked about the particularly overwhelming and painful moments she is confronted with during film shoots, Johnson incorporates practical and simple strategies to maintain “psychological equilibrium”.

“ I try to sleep enough, eat with relish, laugh a lot and move in all kinds of ways. I read what others have written, talk to friends, see a therapist who has known me for years, watch movies and play with my kids. If I have been traveling too much, I stay home and if I have stayed somewhere too long, I go somewhere new and the world surprises me one more time.”

The importance of telling stories is integral to documentaries. Filmmaking is about more than just reporting on tragedies, it’s about giving people a voice. Yet, more often than not, we don’t think about the person behind the camera, who witnesses trauma in order to share stories with the world.