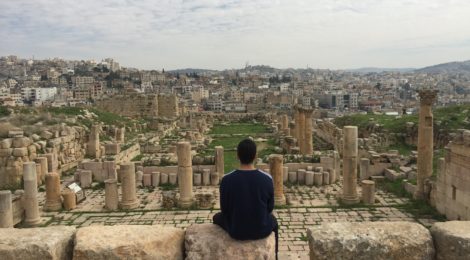 Two kilometres from the Syrian border, in the acrid Jordanian desert, sits Za’atari refugee camp. When it emerged almost overnight, it quickly expanded into a city of refugees. The camp now houses almost 80,000 people who fled their homes to escape the violence from the Syrian war. As of December 2016, roughly 6.3 million people have been internally displaced, where some have found refuge in Jordan.

Inside Za’atari, non-governmental organizations (NGOs) have become indispensable; many refugees have learned to rely heavily on humanitarian aid and health services for necessary resources such as food and water. To further explore the lives of those who live in the camp, I spoke to Maseh Hadaf, a student from Canada who spent several months working with the Jordan Health Aid Society International (JHASi).  His job was to assess the experiences of refugees at JHASi’s clinic in order to improve medical service delivery to refugees across Jordan.

Hadaf met with The Trauma and Mental Health Report to discuss his experiences in Jordan, including his interactions with refugees, humanitarian aid workers, and the local community:

“The refugee camp was barren, in the middle of the desert. There were ditches around the camp, military outposts, Jeeps with machine gun slots in the back driving around, tight security at the gate with an armoured vehicle, and barbed wire and fences absolutely everywhere. The UNHCR clinic we went to was run by JHASi. It was filled with people. There was a sense of desolation and great suffering in this place.

The number of refugees seeking asylum globally has reached a record high since 2016 as a result of intensifying, or more widespread, war, violence, and persecution. Fleeing hardship only to encounter more hardship, was a dimension of the camp’s inhabitants Hadaf witnessed firsthand. The UNHCR reports harrowing experiences that many refugees face while migrating. This includes being sold to armed groups, being forced to pay thousands of dollars to secure ransom release, sometimes enduring torture, being subjected to sexual and gender-based violence, and prolonged periods without adequate food and water. All before arriving to a refugee camp. Even upon arrival to a new country, these sojourners face more challenges as public perception of refugees is often mixed, with a fair number who are vocal about their distaste for them. Some of the more extreme among this group even go so far as to liken refugees to a “virus.” When I asked Hadaf, a Canadian who immigrated from Afghanistan, if his definition of “refugee” has changed since his experiences in Jordan, he said:

“Going in to the experience, I ‘essentialized’ the notion of what a refugee is. What I mean is that I thought that refugees were these downtrodden people who had experienced an unbelievable amount of hardship and needed to be ‘saved’, and that that was all they were. It was an unconscious, innocent assumption, but I very quickly discovered that the refugees I met were just people–some of them were assholes, some of them were hilarious. They were just normal folks. And the humanitarian workers weren’t angels or saviours; a lot of them just needed a job, and this is where they found themselves. The biggest lesson I learned was that refugees are just people! What a revelation.”

There are initiatives that are aiming to shift the ideologies associated with refugees. A Canadian initiative called, “The Together Project,” aims to connect Government-Assisted Refugees (GAR) with Canadian citizens to provide social support to newcomers, and stop the stigma often associated with the label “refugee.” In an interview with the Canadian Broadcasting Corporation (CBC), Alex Ablaza, a volunteer with the project speaks on why she chose to take part as a volunteer;

“There is so much fear mongering around the idea of immigration, especially through social media, and it was really saddening and frustrating for my husband and I. So this was our way of making a difference and trying to shift that conversation towards something more positive.”

When asked her thoughts on recent reports of refugees in the news, Ablaza was asked whether her notion of refugees has changed. She replied;

“This experience reinforced my personal stance on refugees and immigration in Canada, and now getting to know this family, I can’t even imagine what they went through. Now I feel like this is even more important, that we need to be supporting these people.”

Ablaza’s empathy and action is a complete shift from the hostile climate refugees are often met with. This lengthy and unpredictable journey can have severe implications for refugees’ mental health. Hadaf interacted with many refugees while working on his creation of a policy position paper for government officials, bringing to light the various concerns of the refugees who access JHAFi’s clinic, and how operations could be improved for them. I asked him about the mental health of the refugees he encountered while at Za’atari.

“I wouldn’t be able to do it justice. Adequately describing the mental health of refugees is a colossal task, it varies tremendously per person depending on which country they came from, what trauma they have experienced, their support network, their status (are they ‘asylum seekers’ or ‘refugees’), how long they have been refugees, whether they live in the camps or in the city, etc… the experience of individuals who have been refugees for 40 years from Sudan as opposed to recent refugees from Syria in the past few years is quite different, not in any conveniently discernible way. Even in my conversations with Syrian refugees at the clinic, with an interpreter present, there was great variance in the way people coped with the hardships they had experienced.” Despite losing their homes, loved ones, livelihoods, and many aspects of normalcy, refugees can thrive. In addition to advocates like Ablaza, who help integrate refugees into society while increasing the chances of their success, Hadaf attests to the resilience he witnessed within the camp itself:

“I laughed and joked with a couple refugees, and there were kids playing soccer on the man-made dunes and ditches that were meant to slow down or deter a mass exodus from the camp. The uniform, trailer-like homes were painted bright colours, with carefully detailed flowers and stars, and small businesses were opening up in the camp. I even heard from someone that there was a makeshift mall in the works, these are the hints and clues that have made me appreciate the complexity of mental health trauma and resilience.”

Hope for a better future can be found in the most seemingly stark places. When one sees the brightly painted walls of Za’atari camp, and hears of children’s dreams of a new place to call home, it is clear that resilience and hope for the future burn bright in Za’atari. Maybe some of them they just need a little help.

← Finding Your Flow
This is Gospel →