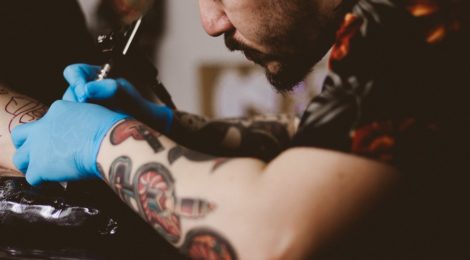 Body Art Stigma Mostly a Thing of the Past

When I was a child, my grandfather’s tattoos were associated with his time in the military. Now, not a day goes by without seeing someone with body art. A study at the University of Saskatchewan, in Canada, explored how a visible tattoo and what kind of tattoo affected prospective clients when evaluating a potential psychologist. While participants generally rated the psychologist without a tattoo as more professional, this did not affect client willingness to obtain services from one with a tattoo. In fact, the psychologist with the most provocative tattoo was perceived as most competent when working with adult populations, in a forensic setting, or in interventions.

The Trauma and Mental Health Report (TMHR) spoke to the lead researcher, Alexandra Zidenberg, about the study. She cautions that the participants were mostly young women, so it is unclear how a more representative group would respond. Zidenberg adds that the individual used for the psychologist profile in the study was “white, thin, and appeared young, which could have affected our results.”

Social psychologist Viren Swami explains that these days, tattoo-related stereotypes are no longer so relevant. His research found that differences in personality traits are negligible between individuals with tattoos and those without. Swami explains:

“In the West, at least, I think many of the ‘traditional’ stereotypes of tattooed individuals (that they are more aggressive, more likely to take risks than non-tattooed individuals) are beginning to fade away. This can largely be attributed to the mainstreaming of tattooing in the West, with a large segment of the population now having at least one tattoo.”

Of course, when choosing what to have tattooed, there are practical, cultural, and even ethical considerations. Certain images are viewed as offensive or tied to extremist connotations, such as the teardrop tattoo. In Japan, tattoos remain banned in many public places, stemming from the history of body art used to cover up tattoos that marked individuals who had committed crimes. In contrast, in some North American Indigenous communities, traditional tattoos on female bodies are considered beautiful, used to denote the passage of femininity and readiness to be a mother. Tattooing can be a choice to connect to one’s culture and identity. Tattooing can also be an act of healing. Swami comments that body art, in both the act itself (enduring the pain of being tattooed) and the product “can be a means of expressing personal catharsis, especially if it involves reclaiming the body following trauma or injury.” He adds that some women who have suffered sexual abuse choose to get a tattoo to reclaim their sense of self. Getting a tattoo can also lead to a healthier body image, which can include reduced anxiety about appearance. Swami says:

“Tattooing specifically and body art in general can play an important role in helping individuals ‘inhabit’, feel comfortable in, and care for their bodies, particularly in societies where so many of us feel like what we should and shouldn’t do with our bodies is heavily regulated.”