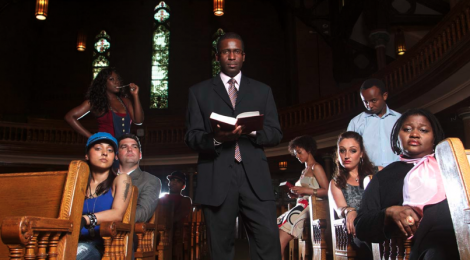 Picture yourself in a church pew, staring at a coffin directly in front of you as a woman starts singing Amazing Grace in the pew next to yours.  This is how the theatrical experience of the fringe show, Awake, begins.  Immediately plunging into the poverty, violence, and corruption prevalent in many communities in Toronto, the show invites its audience into a world where owning a handgun is the norm, and seven year olds know what a crack pipe is, a world where everyone has seen someone get killed.

The show is site specific, meaning that it must be performed in a location other than a theatre in order to be fully captured.  In this particular case, the site is a church (Walmer Baptist Church, Toronto, July 6-17, 2011).

Its story revolves around the actual murders of Justin Shephard and Amon Beckles, two young men from the Jamestown/Rexdale community of Toronto.  What sets this script apart from others that recount such tragic incidents is that this script is derived entirely from interviews of nearly a hundred people involved with the case, including other gang members, the boys’ friends, their mothers, and even police.

The creators, Laura Mullin and Chris Tolley ventured into this high-risk community to discover the many perspectives of those immersed in violence.  The show would not have had the same effect had the stories not been real.  Hearing the actual words of the boys’ mothers made it about as emotionally stirring as a play can be.

Nadia Beckles (played by Beryl Bain) tells the story of how she watched her son die outside the funeral of his best friend, the attempts to do CPR on her son who was dying from gunshot injuries, and how she tried to cover the open holes on his body, feeling the air escaping from his lungs through his open wounds.

While Nadia Beckles was extremely candid with her story, welcoming of Mullin and Tolley, others were more reticent.  During the “talk-back” (a chance for the audience to ask the actors or creators any questions they had) after the show, they explained that some people they were planning to interview backed out at the last minute, suddenly afraid to tell the story they were so eager to share just moments before.  And, some preferred to be interviewed at Mullin and Tolley’s office, located in a different neighborhood, as that felt less exposing.  Still, most were eager to share their stories, especially mothers, and often, Mullin and Tolley had to cut the interviews short after several hours.

The magnitude of the trauma that an entire community can experience is remarkable. One of the characters notices that often people don’t associate such high crime and gang violence with Toronto.  Indeed, this does happen in Toronto.  One girl tells the story of how she was a drug dealer by the time she was ten, and describes the first time she saw someone beaten to death.

A group that has suffered trauma together must cope together.  And that’s exactly what these interviews have facilitated.  By beginning to share their stories, the victims have learned the healing power of sharing, and the value inherent in talking through one’s painful memories.