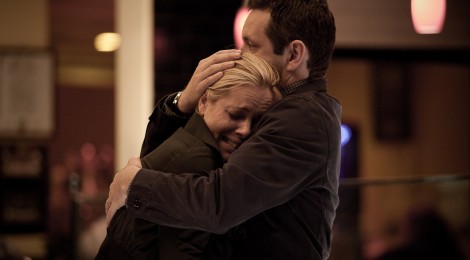 Since the Columbine shooting massacre in 1999, several films have addressed the issue of school shootings.  Freshman filmmaker Shawn Ku has taken on the task of differentiating his movie from the rest within this genre.  His film, Beautiful Boy, takes a subject matter that has been addressed before and focuses on a side that is largely ignored:  the point-of-view of the shooter’s parents.

The movie opens with Sam (Kyle Gallner), the shooter, reciting a poem in one of his lectures at college.  Briefly looking up, he sees his peers, inattentive to his reading.  In this simple, yet powerful moment Ku conveys the sense of disdain Sam feels for his fellow students.  The following day, news reports reach Bill and Kate (Michael Sheen, Maria Bello); they hear about a shooting that took place at their son’s school that day.  After leaving several frantic messages for their son, waiting to hear back from him, police arrive at their home and inform them that not only is their son dead, but he was also the shooter.

So begins the story, as Bill and Kate struggle with their parenting, societal stigma, and mourning the loss of their only child.  The movie has a solid storyline that addresses two important issues:  societal judgment and grieving as a result of trauma and loss.  The latter, trauma and loss, is vital to the story, as you follow two parents who become emotionally disconnected.

Bill and Kate  are living a distant, unattached marriage that seems irreparable.  Their cold and distant relationship becomes clear as they act more like roommates than two people in a committed relationship, doing most things alone, in silence, and living in separate rooms.  Their lack of attachment seems, in part, a precipitating factor in Sam’s aloneness and depressive character.

Consistent with mental health research, Sam’s home life and mental instability are shown as underlying causes for the shooting.  His lack of friends and poor attachment to school are also problematic, ultimately leading to his final actions.

Sam, as described by his mom at the beginning of the movie, “was a shy and quiet boy that kept to himself, with very few friends.”  Gallner’s brief, yet powerful performance conveys the torment and anguish felt by the character, a timid boy who could much more easily express his emotions through writing than verbal means, especially in communication with other people.

Unlike other films on this subject matter, the main focus is not the shooter, but rather his parents, their emotional roller coaster ride, and their coming to terms both with his death and also his actions.  From the outside, Bill and Kate seem like a regular suburban couple.  On closer look, we see a couple that is at the end of their marriage.  Bill’s detached lack of interest silently clashes with Kate’s overly controlling style.  But they do seem to share one trait:  the avoidance of any sort of emotional confrontation.  This becomes especially apparent after the death of their son.  Bill avoids dealing with the situation by emotionally detaching himself, and Kate avoids it through preoccupation.  Their detachment is highlighted by the way they grieve separately, never in front of the other, as though refraining from showing any sign of weakness.

Ku scatters snapshots of avoidance throughout the movie.  The couple briefly stays with Kate’s brother to avoid the media.  The parents make attempts to avoid social judgment, where the media have already portrayed their son as a cold-blooded killer, and have also pinned blame on the parents.  Bill struggles with shouldering the blame for Sam’s actions, while Kate avoids taking any responsibility for the type of person her son had become.  Her avoidance of the situation, combined with the death of their only child, was ultimately what prevented them from truly dealing with the situation.

The film Beautiful Boy is a compelling portrayal of  loss and trauma.  The conflict is best described by Kate herself, when she says to her husband:  “Did we do too much?  Did we not do enough?”  Any parent in this situation would ask the same questions.  In this case, Kate grapples with the ways in which this traumatic, tragic event can be understood as their fault.

This movie takes a less traditional approach to addressing the topic of school shootings, focusing on the aftermath and shining light on the loss experienced by the parents of the shooter.  I highly recommend this film to those who want to take a glimpse into the dynamic nature of relationships and how such trauma can affect individuals over a lifetime.

← Play Review: “Awake”
When a Family Member is Diagnosed with Schizophrenia →