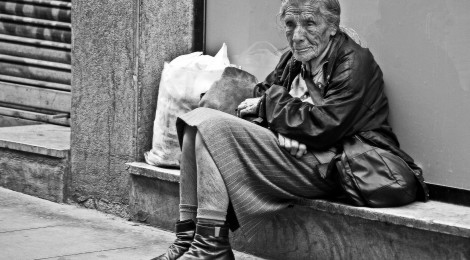 It is estimated that the number of homeless living in Canada is approximately 150,000 (counting those residing in shelters), and another 50,000 to 150,000 living on the streets.  Homelessness affects individuals of all ages, genders, and ethnicities.  We often consider homelessness to be a result of poverty, lack of housing or government support, and economic challenges such as raising a child alone; however, homelessness can also be caused by physical, sexual and emotional trauma, such as domestic violence.  Tom Regehr of CAST Canada considers trauma to be most often the root cause of homelessness, and that most cases of homelessness result from a series of losses, so severe and betraying, that these individuals cannot even tolerate the idea of hope.

Furthermore, homelessness itself can lead to further trauma.  The loss of a home is often accompanied by loss of community, possessions, and security.  Regehr states that regarding the homeless, there may be those with severe and persistent mental illness or those who have experienced multiple traumas, and that what homeless individuals have in common is an internal, ongoing terror, as well as loneliness, despair, fear, and dread.  Even the lives of their family are affected.  If contact is not maintained, the family may be worried about the unknown state of their homeless family member.

Across Canada, there are approximately 17,000 shelter beds available, however there are almost 400,000 individuals who are vulnerably housed, in need of stable shelter. Conditions in shelter life may also produce traumatic symptoms, as individuals who live there must adjust to a new, often problematic living environment; one that exposes them to high-risk situations such as physical or sexual assault (occurring to them personally or witnessed).

Since homelessness can cause further trauma both as a result of its very nature, and by exposing the individual to dangerous situations, it is important to consider trauma-specific services to help families and individuals who have experienced homelessness. Regehr suggests that by the time someone seriously needs help from an agency, trauma is a factor.  “Even if it is mild and one might normally recover, the ongoing let downs, put downs, disappointments and insults add up to crushing hope.  Once someone is fully entrenched in a place of hopelessness, even seemingly ‘helpful’ ideas, tools, suggestions can cause harm and direct pain.  It is important for any professional working with a person in-need, to be trauma informed.”