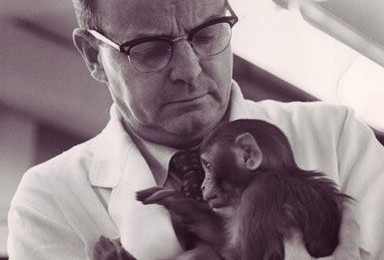 Harry Harlow received his BA and PhD (1930) in psychology from Stanford University and immediately joined the faculty at the University of Wisconsin. Within a year, he had established the Psychology Primate Lab, which continued expanding until it joined with the Wisconsin Regional Primate Lab in 1964. Harlow became the director of the merged research center. Among the scientists to work there was Abraham Maslow, who would later establish the school of humanistic psychology. Harlow was intrigued by love. He questioned the theories then current which stated that love began as a feeding bond with the mother and applied by extension to other family members. Other theories claimed that humans and other social animals lived in organized societies simply to regularize sexual contact. Starting in 1957, Harlow worked with rhesus monkeys, which are more mature at birth than humans, but like human babies show a range of emotions and need to be nursed. He took infant monkeys away from their real mothers, giving them instead two artificial mothers, one model made of wire and the other made of cloth. The wire model was outfitted with a bottle to feed the baby monkey. But the babies rarely stayed with the wire model longer than it took to get the necessary food. They clearly preferred cuddling with the softer cloth model, especially if they were scared. (When the cloth model had the bottle, they didn’t go to the wire model at all.) In another study, Harlow found that young monkeys reared with live mothers and young peers easily learned to play and socialize with other young monkeys. Those with cloth mothers were slower, but seemed to catch up socially by about a year. Babies raised with real mothers but no playmates were often fearful or inappropriately aggressive. Baby monkeys without playmates or real mothers became socially incompetent, and when older, were often unsuccessful at mating. Those unsocial females that did have babies were neglectful of them. From his studies, Harlow concluded that sex alone did not drive societies, nor did mother love enable individual social relations. Rather, normal sexual and parental behavior depended on a wide array of affectional ties with peers and family early in life.

Harlow’s theories, of course, raised many more questions that other researchers would tackle. Interestingly, his scientific study of love came at a time when science was generally held in high regard. Perhaps it could even reveal the mysteries of love.