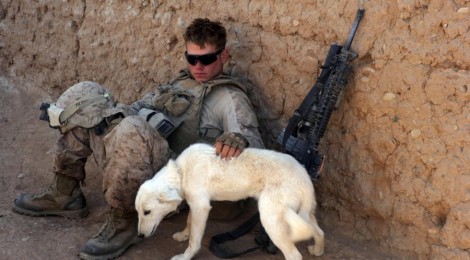 After his return from the Vietnam war, Raymond Galmiche, now 64, would experience nightmares, sleeplessness, and flashbacks.  Trying to soothe his symptoms, he sought help from friends, family, and councillors.  But it wasn’t until Galmiche got a German shepherd service dog named Dazzle that symptoms subsided.

Over 300,000 U.S. veterans, many of whom served in Iraq and Afghanistan suffer from Post Traumatic Stress Disorder.  Symptoms of PTSD include feelings of helplessness, fear, nightmares, flashbacks and ruminating about traumatizing events.  Physical symptoms occur such as night sweats, high blood pressure, nausea, and muscle tension.  Unlike the reactions that many exhibit in response to highly stressful situations, these are chronic and often debilitating.  Help is critical, however only about one in three veterans who served in Iraq seek counselling.  Without help, veterans have been known to turn to alcohol, drug abuse, or even suicide to rid themselves of symptoms, and to cope with the daily distress caused by PTSD.

Often family members can be affected; those suffering from PTSD may become angry or lack affection, causing loved ones to blame themselves for the highly emotional person that has come to replace the one they once knew.

The use of service dogs to help treat PTSD is not so well known.  The most common treatments for PTSD include one-on-one therapy, group/family therapy, and medications such as Prozac or Zoloft.  Despite the seeming therapeutic benefits of having a service dog, as of Oct. 5th 2012, the American Veterans’ Association no longer covers the cost of these helpful animals.

The Veterans Association covers the cost of service dogs for veterans who have physical disabilities such as blindness and deafness.  Even though there are numerous personal accounts of the benefits of service dogs for veterans suffering from PTSD, formal research into the benefits of these animals for people with mental illness is lacking.  Anecdotal accounts, however, have shown that up to 80% of PTSD patients who own trained service dogs show decreases in symptoms, sometimes even eliminating the need for anti-depressants. Mental health websites such as Help Guide (www.helpguide.org) list ways to help loved ones cope with PTSD.  They suggest patience and understanding, not pressuring loved ones into talking, not taking PTSD symptoms personally, and anticipating and preparing for PTSD triggers.

Dog owners know that traits like compassion and loyalty can easily be used to describe “man’s best friend.”  Service dogs can be trained to recognize PTSD triggers and then trained to console and calm the owner.

Galmiche’s dog, Dazzle, slept beside him, comforting him during nightmares or other PTSD-related episodes.

Research has shown that even the simple act of petting a dog can release neurotransmitters such as oxytocin, of which several benefits include stress reduction, reductions in cravings for substances, and improvement in social skills.  Among the more compelling benefits of service dogs is that, in contrast to pharmaceuticals, they aren’t associated with harmful side effects. The cost of treating veterans with PTSD and major depression is almost double the cost of general health care for veterans without PTSD.  The cost of a service dog including purchase, veterinary bills, and training is approximately $5200, however, there are also non-profit organizations, such as Soldiers’ Best Friend who help vets train their dogs free of charge.

Given the high price paid in military spending, as well as the personal and social cost of not treating our veterans, this represents $5200 well spent.