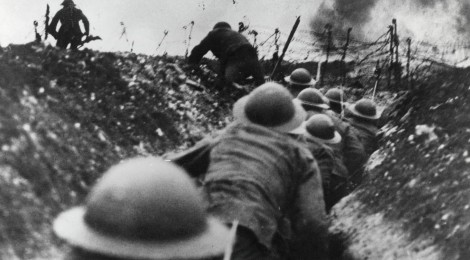 Happy are men who yet before they are killed

Can let their veins run cold.

Or makes their feet

Sore on the alleys cobbled with their brothers.

But they are troops who fade, not flowers

Longer; but no one bothers.

And some cease feeling

The tease and doubt of shelling,

Comes simpler than the reckoning of their shilling.

They keep no check on armies’ decimation.

Happy are these who lose imagination:

They have enough to carry with ammunition.

Their spirit drags no pack.

Their old wounds, save with cold, can not more ache.

Having seen all things red,

Their eyes are rid

Of the hurt of the colour of blood forever.

And terror’s first constriction over,

Their senses in some scorching cautery of battle

Can laugh among the dying, unconcerned.

Happy the soldier home, with not a notion

How somewhere, every dawn, some men attack,

And many sighs are drained.

Happy the lad whose mind was never trained:

His days are worth forgetting more than not.

He sings along the march

Which we march taciturn, because of dusk,

From larger day to huger night.

We wise, who with a thought besmirch

Blood over all our soul,

How should we see our task

But through his blunt and lashless eyes?

Alive, he is not vital overmuch;

Nor sad, nor proud,

Nor curious at all.

Old men’s placidity from his.

But cursed are dullards whom no cannon stuns,

That they should be as stones;

Wretched are they, and mean

With paucity that never was simplicity.

By choice they made themselves immune

To pity and whatever moans in man

Before the last sea and the hapless stars;

Whatever mourns when many leave these shores;

The eternal reciprocity of tears. Wilfred Edward Salter Owen MC (18 March 1893 – 4 November 1918) was an English poet and soldier, one of the leading poets of the First World War. His shocking, realistic war poetry on the horrors of trenches and gas warfare was heavily influenced by his friend Siegfried Sassoon and stood in stark contrast to both the public perception of war at the time, and to the confidently patriotic verse written by earlier war poets such as Rupert Brooke. Among his best-known works – most of which were published posthumously – are “Dulce et Decorum Est”, “Insensibility”, “Anthem for Doomed Youth”, “Futility” and “Strange Meeting”.