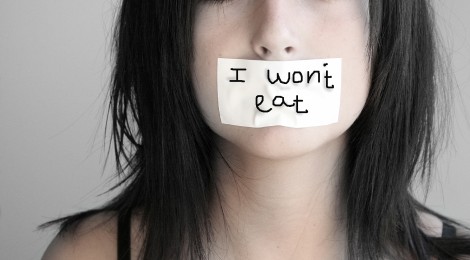 “I just want to take a knife and cut the fat out of my legs.  I’m pretty sure the fat from my legs can feed a whole village” –posted on Tumblr

Teenage girls striving for unrealistic ideals of beauty is nothing new, but their approach has changed.

Comments like the one posted on Tumblr have flooded virtually every social media site.  This has transformed the medium into one through which teenage girls and women can share their dissatisfaction with their bodies and encourage each other to aim for unhealthy goals.

Type “thigh gaps” into Google and the number of posts encouraging women to achieve this unattainable goal is striking.

The term refers to the space between the upper thighs that many young women consider a new marker of ideal body weight.  Through extreme dieting, exercising, or starving, teenage girls and young women proudly post tips for extreme weight loss success, displaying their shrinking thighs. Canadian psychotherapist Kimberly Moffit considers the ideal thigh gap the new “benchmark for beauty.”  In a CTV News appearance, Moffit notes how thigh gaps have become an online obsession and a way for women to “quantify their beauty.”  Because thigh gaps are so distinct,  women are able to clearly view this as an achievement and share it with others on the Internet.

Thinspo, an abbreviation for thinspiration, refers to images used by girls to inspire, motivate, and remind themselves of their (rather unrealistic) goals around thinness.  Social media allow for easy sharing of these images and messages.

By glamourizing and idealizing thigh gaps on social networking sites, they become the new “normal,” one that paradoxically, is unattainable.

While many social media sites have been flooded with posts encouraging thigh gaps, a few have attempted to shed light on extreme dieting or starving, and on unhealthy workout practices, noting that the individuality of each body affects how achievable these goals are.  For women with narrower hip bone structure it becomes almost impossible to obtain a thigh gap.

In a Toronto Sun article, psychotherapist Deborah Mecklinger explains that teenage girls and young women can now connect with each other and share once-private information through social media technology, and that this can have adverse effects on identity development.

The book Digital Youth: The Role of Media on Development by David Šmahel and Kaveri Subrahmanyam describes how such sharing on social networking sites plays a crucial role in helping young people form identities.  The online social groups and people whom we interact with, in addition to other factors, such as frequency of communication, intensity of involvement, and type of relationship, all affect identity formation. It is destructive to identity formation when online trends, such as thigh gaps, and the “likes,” “shares,” and online approval of people on social networking sites become critical in determining an individual’s mental health, happiness, and wellbeing.

Social networking can become an interest that spins out of control, and feeds into obsessions such as thigh gaps.  A study led by Wilhelm Hofmann of the University of Chicago’s Booth Business School found that social media seem to be more addictive than cigarettes and alcohol.

Some sites such as Instagram have started to fight back.  To help control the obsession with thigh gaps, Instagram has recently banned the use of hash tags that contain anorexia, skinny, or extreme dieting related jargon.

With increasing reliance on social media, in what is now being called the social media revolution, networking sites have come under greater scrutiny.  Because social networking has become an essential aspect of everyday life, especially for young people, social media sites need to create platforms for open discussion without encouraging or feeding into unhealthy practices such as thigh gaps.

Caroline Marin, the media relations coordinator for Health Talk, a health news blog out of the University of Minnesota thinks that media awareness programs for youth may be an effective tool to make social networking sites a healthier space for discussions.  Awareness may hold the key to unlock the advantages offered by social media.