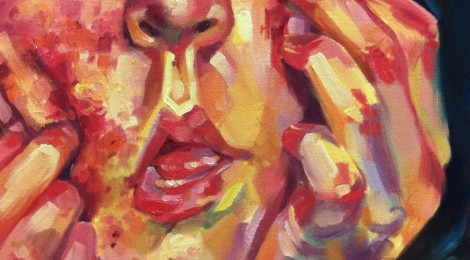 Why Can’t I Stop? The Cycle of Pathological Skin Picking

“It’s as though I’m in a soothing trance.  I do it when I’m feeling anxious and it’s only later that I realize how much time has gone by.  It’s then that I pull away from the mirror and see how much damage I’ve done,” says Audrey (name changed), a Canadian university student who appears to suffer from dermatillomania.

Pathological skin picking (PSP) or Dermatillomania is an extreme and compulsive grooming habit.  For the approximate 15% of the population who suffer from PSP, the body focused repetitive behavior (BFRB) is experienced as shameful, very difficult to break, and can have serious physical and psychological effects.  Individuals report spending hours picking at their bodies, biting their nails, or pulling out their hair.

Individuals suffering from PSP can become so enraptured in their picking that they may go so far as to cause lesions, infections, scarring and pigmentation as well as substantial emotional distress and functional impairment. “It’s embarrassing, I can’t wear certain tops because I’m afraid people will see my shoulders and I have to wear so much foundation to cover up the scars and scabbing.  I have a hard time interacting with people because I assume they’re always thinking about how terrible my skin is.”

While it seems that only a small percentage of the population has PSP, a study showed that up to 37% of a student population displayed at least one type of BFRB secondary to their primary disorder and 45% of the student population diagnosed with Body Dysmorphic Disorder engaged in lifelong pathological picking.

Although the Diagnostic and Statistical Manual of Mental Disorders places PSP under the obsessive-compulsive disorders umbrella, Brian Odlaug and Jon Grant on faculty at the Department of Psychiatry, University of Minnesota assert that some people with PSP may have more in common neuro-biologically with people with addictions than those with obsessive-compulsive disorder.

Difficult to pinpoint diagnostically, PSP seems to be a disorder both on its own as well as a habit or compulsion that may develop alongside other more prominent disorders.

Unfortunately, individuals with PSP rarely seek dermatological or psychiatric treatment for their condition in large part due to their shame surrounding the matter and also a belief that their condition is untreatable.  Low rates of disclosure have led to little research done before the 2000s.  Health care practitioners were unlikely to diagnose the disorder and identify the habit as problematic. Even now, with the benefit of some research on PSP, practitioners are unclear on how to treat it.

Kathrin Schuck, Ger Keijsers, and Mike Rinck on faculty at Radboud University Nijmegen in the Netherlands investigated the effectiveness of SSRI antidepressants and cognitive-behavioural therapy and found the latter to be much more beneficial than medication.

The causal roots of PSP are equally unclear and some individuals may spend decades struggling with the anxiety surrounding the condition.  Women seem more likely to develop the disorder, however this finding may be based on low self-reports by men too ashamed to admit to having the problem.

“I think I started around puberty, when my skin started changing and I was going through a lot of stress at school. I didn’t realize it was a problem until someone pointed it out to me years later. I didn’t know it was so visible,” Audrey says.

Research has also suggested that PSP could develop during childhood and early adolescence and that clinicians should pay attention to early signs that may be indicative of future problems.

Anecdotal accounts on numerous internet sites dedicated to discussing PSP suggest that many with the disorder have experienced some form of past trauma.  Some report “punishing themselves” or feeling as though their habits confirm how unattractive and worthless they feel in comparison to others.

And others claim that it is simply a habit without any emotional underpinnings that they are unable to break.

The problem is certainly frustrating for many.  Audrey states, “I’ll go three days without picking, then a week, and then I think I’ll never have to again.  But I always do.”

Although its cause is unclear, PSP can lead to emotional and physical damage and is much more serious than was previously believed.  Like breaking any habit, addiction or compulsion, overcoming PSP requires commitment and strong will.  People who are distressed and ashamed may find comfort in knowing that there are treatments available.  It is up to them to make the decision to ask for help.