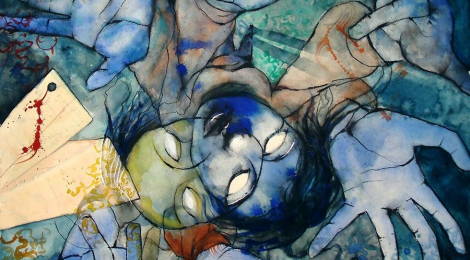 It is almost impossible to imagine the realities endured by victims of ritual abuse:  multiple abusers with systematic motives, coordinated with the sole purpose of perpetrating and maintaining a cycle of abuse.  Cults and organizations such as David Koresh’s Branch Davidians use torture and sexual abuse to control their members and force them into compliance.

“…repeated abuse over an extended period of time.  The physical abuse is severe, sometimes including torture and killing.  The sexual abuse is usually painful, humiliating, intended as a means of gaining dominance over the victim.  The psychological abuse is devastating and involves the use of ritual indoctrination.  It includes mind control techniques which convey to the victim a profound terror of the cult members…most victims are in a state of terror, mind control and dissociation.” According to psychologist Louis Cozolino of Pepperdine University ritual abuse is characterized by a number of perpetrators of both sexes and the presence of many victims.  The abuse is often carried out in contexts where children are in groups, and within families or groups of families.

Often seen are mind-control techniques that involve combinations of extreme abuse and “brainwashing.”  For example, “psychic driving” is defined by psychologist Ellen Lacter (who runs www.endritualabuse.org) as taped messages that are played for hours non-stop, while the victim is in a state of consciousness altered by sleep deprivation, electro-shock, sensory deprivation, and inadequate nutrition.

Researcher Patricia Precin of the New York Institute of Technology, alongside Cozolino, report that many ritual abuse survivors suffer from PTSD.  Clinicians also see a high frequency of Dissociative Identity Disorder (DID) among such adolescent and adult patients.

And in an Australian study of workers at the Center against Sexual Assault (CASA) including psychiatrists, psychologists, and other clinicians, 70 per cent of all counselors agreed with a single definition of ritual abuse and 85 per cent agreed that ritual abuse was an indication of genuine trauma.  CASA workers were much more likely to believe their client’s ritual abuse and marginally more likely to identify ritual abuse cases than other therapists.

Cozolino references a vast amount of corroborating evidence for the existence of ritual abuse, such as police reports and therapeutic case studies.  In one of his papers he describes one such case:

“A five-year-old victim in the Country Walk case related that one of his abusers at his day-care setting had been killing birds.  This young boy spontaneously repeated the following well-rehearsed prayer to his startled father:

Please take this bird with you

and take all the children up to hell with you.

You gave me grateful gifts.

God of Ghosts, please hate Jesus and kill Jesus because

He is the baddest, damnedest person in the whole world.

We don’t love children because they are a gift of God.

We want the children to be hurt.’ ”

Although such accounts are well documented, not everyone believes ritual abuse exists.  Bernard Gallagher from the Centre for Applied Childhood Studies at the University of Huddersfield considers ritual abuse a result of erroneous diagnosis made by agency workers:

“This includes pressuring children into making disclosures, the misinterpretation of children’s statements and an over-reliance upon preconceived ideas concerning the existence of ritual abuse.  This results in what psychologists and statisticians might refer to as ‘false positives, ” writes Gallagher.

Escaping the torment of a cult is perhaps the most difficult part for a survivor, but recovery and rehabilitation can be just as challenging.  Cozolino and colleague Ruth Shaffer interviewed survivors, focusing questions on recovery.  They reported that the majority considered participation in support groups a necessary adjunct to psychotherapy.

It may seem counterintuitive to treat ex-cult members as a group because their abuse took place in a group setting.  However certain precautions may be taken to make treatment effective.

For example, British researcher Nicole Durocher notes that organizers must take care not to construct a group that resembles a cult gathering in any way.  The support group has to be sensitive to the special needs of each ex-cult member and to the particular context of the cult from which they exited. One survivor of multi-generational ritual abuse who wishes to remain anonymous, has written a public letter to the Stop Mind Control and Ritual Abuse Today (S.M.A.R.T) organization, reflecting on his own struggle with PTSD.

“My PTSD often reminds me of what it is to be a soldier.  On the battlefield when every moment is life and death, a soldier will do many things and anything to survive.  When the soldier returns to a normal, non-war society he can’t understand why he did the things he did.”

He goes on to say that with the help of therapy, his shattered life and sense of self can be pieced together again:

“I cry, I sing, play guitar, listen to music, sleep normal hours instead of being awake all night, and more than anything else, I try to change who I was… into who I am.”

← Argument Park
I Want to Be Well →