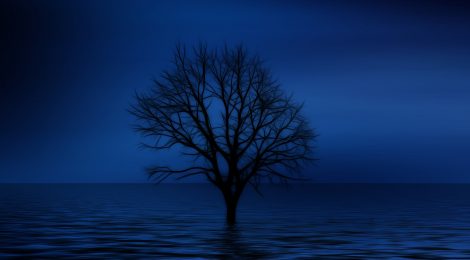 The poem ‘Requiem’ by Anna Akhmatova documents the trauma and suffering of the Russian people under Joseph Stalin. The poem was conceived as she waited in a line to visit her son Lev in prison. Created between 1935 and 1940, each line was memorized by Akhmatova and her friends to preserve the poem. It was first published outside of Russia in 1963 and finally published in Russia in 1987. We are reminded that trauma can be a collective experience, combining individual and community suffering. This poem illuminates the resilience of individuals, people, and a culture in the face of great trauma, but also the suffering and losses experienced. This poetic journey embodies the role of artists in carrying the memory of their people in individual and collective histories. No foreign sky protected me,
no stranger’s wing shielded my face.
I stand as witness to the common lot,
survivor of that time, that place.

Instead of a Preface

In the terrible years of the Yezhov terror I spent seventeen months waiting in line outside the prison in Leningrad. One day somebody in the crowd identified me. Standing behind me was a woman, with lips blue from the cold, who had, of course, never heard me called by name before. Now she started out of the torpor common to us all and asked me in a whisper (everyone whispered there): “Can you describe this?” And I said: “I can.” Then something like a smile passed fleetingly over what had once been her face.

Such grief might make the mountains stoop,
reverse the waters where they flow,
but cannot burst these ponderous bolts
that block us from the prison cells
crowded with mortal woe… .
For some the wind can freshly blow,
for some the sunlight fades at ease,
but we, made partners in our dread,
hear but the grating of the keys,
and heavy-booted soldiers’ tread.
As if for early mass, we rose
and each day walked the wilderness,
trudging through silent street and square,
to congregate, less live than dead.
The sun declined, the Neva blurred,
and hope sang always from afar.
Whose sentence is decreed? … That moan,
that sudden spurt of woman’s tears,
shows one distinguished from the rest,
as if they’d knocked her to the ground
and wrenched the heart out of her breast,
then let her go, reeling, alone.
Where are they now, my nameless friends
from those two years I spent in hell?
What specters mock them now, amid
the fury of Siberian snows,
or in the blighted circle of the moon?
To them I cry, Hail and Farewell!
[March 1940]

That was a time when only the dead
could smile, delivered from their wars,
and the sign, the soul, of Leningrad
dangled outside its prison-house;
and the regiments of the condemned,
herded in the railroad-yards,
shrank from the engine’s whistle-song
whose burden went, “Away, pariahs!”
The stars of death stood over us.
And Russia, guiltless, beloved, writhed
under the crunch of bloodstained boots,
under the wheels of Black Marias.

At dawn they came and took you away.
You were my dead: I walked behind.
In the dark room children cried,
the holy candle gasped for air.
Your lips were chill from the ikon’s kiss,
sweat bloomed on your brow–those deathly flowers!
Like the wives of Peter’s troopers in Red Square
I’ll stand and howl under the Kremlin towers.

Quietly flows the quiet Don;
into my house slips the yellow moon.

It leaps the sill, with its cap askew,
and balks at a shadow, that yellow moon.

with husband dead, with son away
in jail. Pray for me. Pray.

Not, not mine: it’s somebody else’s wound.
I could never have borne it. So take the thing
that happened, hide it, stick it in the ground.
Whisk the lamps away…
Night.

They should have shown you–mocker,
delight of your friends, hearts’ thief,
naughtiest girl of Pushkin’s town–
this picture of your fated years,
as under the glowering wall you stand,
shabby, three hundredth in the line,
clutching a parcel in your hand,
and the New Year’s ice scorched by your tears.
See there the prison poplar bending!
No sound. No sound. Yet how many
innocent lives are ending…

For seventeen months I have cried aloud,
calling you back to your lair.
I hurled myself at the hangman’s foot.
You are my son, changed into nightmare.
Confusion occupies the world,
and I am powerless to tell
somebody brute from something human,
or on what day the word spells, “Kill!”
Nothing is left but dusty flowers,
the tinkling thurible, and tracks
that lead to nowhere. Night of stone,
whose bright enormous star
stares me straight in the eyes,

The weeks fly out of mind,
I doubt that it occurred:
how into your prison, child,
the white nights, blazing, stared;
and still, as I draw breath,
they fix their buzzard eyes
on what the high cross shows,
this body of your death.

The word dropped like a stone
on my still living breast.
Confess: I was prepared,
am somehow ready for the test.

So much to do today:
kill memory, kill pain,
turn heart into a stone,
and yet prepare to live again.

Not quite. Hot summer’s feast
brings rumors of carouse.
How long have I foreseen
this brilliant day, this empty house?

You will come in any case–so why not now?
How long I wait and wait. The bad times fall.
I have put out the light and opened the door
for you, because you are simple and magical.
Assume, then, any form that suits your wish,
take aim, and blast at me with poisoned shot,
or strangle me like an efficient mugger,
or else infect me–typhus be my lot–
or spring out of the fairy tale you wrote,
the one we’re sick of hearing, day and night,
where the blue hatband marches up the stairs,
led by the janitor, pale with fright.
It’s all the same to me. The Yenisei swirls
the North Star shines, as it will shine forever;
and the blue lustre of my loved one’s eyes
is clouded over by the final horror.

Already madness lifts its wing
to cover half my soul.
That taste of opiate wine!
Lure of the dark valley!

Now everything is clear.
I admit my defeat. The tongue
of my ravings in my ear
is the tongue of a stranger.

No use to fall down on my knees
and beg for mercy’s sake.
Nothing I counted mine, out of my life,
is mine to take:

not my son’s terrible eyes,
not the elaborate stone flower
of grief, not the day of the storm,
not the trial of the visiting hour,

not the dear coolness of his hands,
not the lime trees’ agitated shade,
not the thin cricket-sound
of consolation’s parting word.

A choir of angels glorified the hour,
the vault of heaven was dissolved in fire.
“Father, why hast Thou forsaken me?
Mother, I beg you, do not weep for me…”

Mary Magdalene beat her breasts and sobbed,
His dear disciple, stone-faced, stared.
His mother stood apart. No other looked
into her secret eyes. No one dared.

I have learned how faces fall to bone,
how under the eyelids terror lurks
how suffering inscribes on cheeks
the hard lines of its cuneiform texts,
how glossy black or ash-fair locks
turn overnight to tarnished silver,
how smiles fade on submissive lips,
and fear quavers in a dry titter.
And I pray not for myself alone…
for all who stood outside the jail,
in bitter cold or summer’s blaze,
with me under that blind red wall.

Remembrance hour returns with the turning year.
I see, I hear, I touch you drawing near:

the one we tried to help to the sentry’s booth,
and who no longer walks this precious earth,

and that one who would toss her pretty mane
and say, “It’s just like coming home again.”

I want to name the names of all that host,
but they snatched up the list, and now it’s lost.

I’ve woven them a garment that’s prepared
out of poor words, those that I overheard,

and will hold fast to every word and glance
all of my days, even in new mischance,

and if a gag should blind my tortured mouth,
through which a hundred million people shout,

then let them pray for me, as I do pray
for them, this eve of my remembrance day.

And if my country ever should assent
to casting in my name a monument,

I should be proud to have my memory graced,
but only if the monument be placed

nor in the Tsar’s garden near the sacred stump,
where a grieved shadow hunts my body’s warmth,

but here, here I endured three hundred hours
in line before the implacable iron bars.

Because even in blissful death I fear
to lose the clangor of the Black Marias,

to lose the banging of that odious gate
and the old crone howling like a wounded beast.

And from my motionless bronze-lidded sockets
may the melting snow, like teardrops, slowly trickle,

and a prison dove coo somewhere, over and over,
as the ships sail softly down the flowing Neva.

(Translated from Russian by Stanley Kunitz and Max Hayward in Poems of Akhmatova, Atlantic-Little, Brown, 1973)