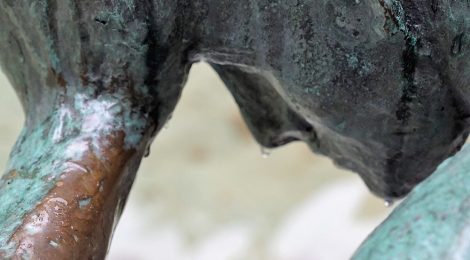 Yannoulis Chalepas is well-regarded as being the most notable sculptor of modern Greece. Born in 1851, Chalepas followed in his father’s footsteps by helping run the family business of marble sculpting. Denying his mother’s request that he become a merchant, Chalepas pursued his education at the Munich Academy of Fine Arts, where his works went on to win many awards. In 1877, the artist experienced a severe nervous breakdown that could not be explained by anyone. During his inexplicable bout of anxiousness, Chalepas destroyed a few of his own marble creations and made several attempts on his own life. At 36 years old, the suffering protégé was diagnosed with dementia. Despite his mother insisting that Chalepas quit sculpting (as she believed it was the cause of his illness), he continued to produce arguably better pieces than he had prior to his dementia. Critics say that his dementia freed him from the societal restraints of neoclassical ideologies, allowing him to create brilliant sculptures that have stood the test of time.