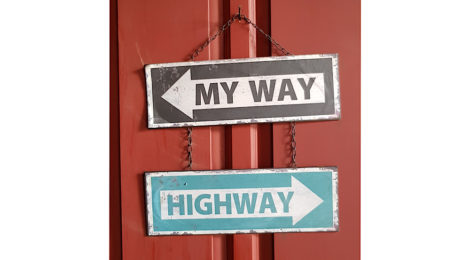 ‘My way’ is a popular song written by Paul Anka and performed by Frank Sinatra in 1969. At first glance, it appears to be a sad song painting the picture of an old guy nearing his death looking back fondly at a life that he lived his own way.

In an interview, Sinatra’s daughter, Tina, revealed that the singer loathed the song as he found it to be self-serving and self-indulgent. Sinatra had his own share of guilt regarding the way behaved as a father, always putting his work first. The song, however, had a staying power for decades and became the symbol of self-determination, strength and carving one’s own path in life.

In the end, the song is about the power of choice in one’s life. With the freedom to choose comes the responsibility to accept the consequences, whether good or bad. How to learn from each experience and deal with regrets and past mistakes. Struggling to find closure with regrets might have been the reason that Sinatra despised the song in his later years in life.

“Regrets, I’ve had a few
But then again, too few to mention
I did what I had to do
And saw it through without exemption
I planned each chartered course
Each careful step along the byway
But more, much more than this
I did it my way
Yes, there were times, I’m sure you knew
When I bit off more than I could chew
But through it all, when there was doubt
I ate it up and spit it out
I faced it all and I stood tall
And did it my way”