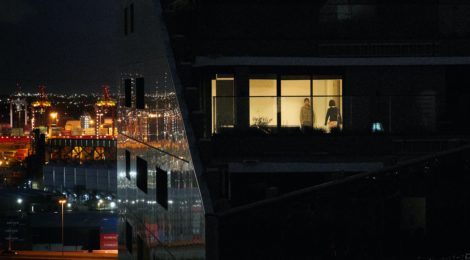 The Neighbours’ window tells a story of a mother named Alli who has three children. She has grown frustrated of her relationship with her husband Jacob and their daily routine. Over time, Alli becomes fixated on the lives of a young couple who live in the opposite building. She continuously watches their lives from her window and becomes distressed as she compares her life with theirs. She witnesses their daily routines and watches them as they host dinner parties and become intimate with each other. That is until one day, she notices that the man next door has shaved his head. As she continuously spies on the couple, she finds out he is in hospice and dies. She sees him being taken out of the house in a body bag. She then finds the wife crying on the sidewalk and has a heartfelt conversation with her. The woman reveals to Alli that ever since her husband became sick, they would find comfort in watching their family through their window, and they especially enjoyed watching the children play with the parents.

Kyle Holl talks more about the lesson of this short film:

“At its heart, this is a story about appreciating what you have.  At a very basic level, the lesson here is not to covet the lifestyles of those around you, and to be cognizant of the fact that even on most of our worst days, there’s someone who would rather be in our position than their own. We often fall into our daily patterns and take our small comforts for granted, and it can be helpful to take a step back and acknowledge those things. The Neighbors’ Window does a great job of illustrating that. To borrow one of the thousands of social media self-help cliches: the grass isn’t greener on the other side, but where you water it.”