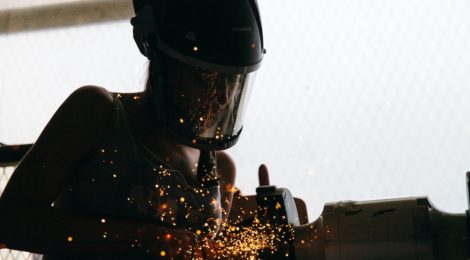 Diamonds in the Rough:  How Harassment Excludes Women from Trades

“You have to have thick skin.”

Joanne (name changed) is a woman and an apprentice in a male-dominated trade union. She has already experienced many instances of unwanted sexual advances and has been the subject of several crude rumours despite only being in the second year of her apprenticeship.

Many women have experienced sexual harassment, whether through sexually explicit rumours, catcalling, or assault. So many are wary of interactions that feel unsafe, and women’s experiences working in the trades are no exception. Joanne shares her experience:

“I’m a girl in the trades. People are always going to question whether or not it really happened, and rumours will start. Hearing those rumours makes me wonder: what else is being said about me? I have to keep my personal life and my work life separate.” Joanne’s male coworkers seem to be aware of the reality of being a woman in the trades. Kevin (name changed) is also a second-year apprentice. When asked how he would feel if he had a sister or daughter in the trades, he said it would be terrifying. Yet Kevin is reluctant to speak up when female coworkers are harassed, fearing the label of troublemaker. In recounting the story of a female co-worker who received an unsolicited sexual photo, he said:

“I told her she had to tell someone, but I didn’t know what else to do. I didn’t want to get roped into it and end up getting shit for it as well. Everybody instantly knows that you’re involved and doesn’t want to work with you, and you can miss out on jobs.”

Not only can workplace gossip be humiliating, but it can also have lasting negative consequences.

And work environments like these may contribute to reluctance among women to join trades.

Kristyn Frank, research sociologist at Statistics Canada, co-authored a report on how women in male-dominated trades fare in the labour market. In an interview with the Trauma and Mental Health Report (TMHR), Frank offered some insight:

“Some research indicates that women’s choice of occupation is partly influenced by cultural expectations, which are related to stereotypical gender roles. There is also some indication that the lower representation of women in more technically-oriented occupations could be due to a lack of female role models in the field, a lack of self-confidence in the skills needed to work in these occupations, or it could be due to women’s preferences and interests.” While the skilled trades often pay well and provide benefits, there are still very few women in the field. So, what can be done to recruit more women?

Amy worked as an electrician for 15 years before working with the Ontario Ministry of Labour, Training, and Skills Development. She says:

“I think it has more to do with the fact that women just don’t know how rewarding it can be or that a trade is even an option to them. I have far more favourable recollections of working in a male-dominated trade than not. When I started, I would only occasionally see other women.

Never in my time did I see two women working for the same company. I know we are still a minority in the workplace, but it is changing.”

In terms of supporting women once they enter the trades, Joanne has one request:

“Speak up. If somebody hears or sees something that isn’t right, say no or tell them to stop. Say something about it.”

← More Than Words: The Power of Spoken Word Poetry
Boys Like Me →