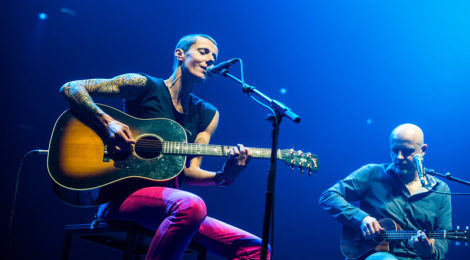 It’s too easy to assume, as so many already have, that the ’90s classic anthem “Not An Addict” by Belgian rock band K’s Choice from the album Paradise in Me, is simply about the denial of drug addiction. However, according to an interview with Billboard magazine, the song’s meaning takes on a more nuanced perspective of (formerly known as Sarah), transgender lead singer Sam Bettens’ view of controlled substance dependence, and the criminality of what he considered “soft drugs” like cannabis at the time.

Even though most ’90s rock bands proudly wore their ‘sex-drugs-rock-and-roll’ personas unapologetically on their sleeves, Bettens was fairly open about having made a valiant effort to avoid “hard drugs.” He was nonetheless still forthcoming about using cannabis and experimenting with psychedelics. In his interview, Bettens fully acknowledges, “I was addicted to cigarettes really bad,” also admitting, “I’ll smoke a joint once in a while and I might try acid or mushrooms, but I’ve never done any hard drugs, and I don’t think I want to.” The reason he explained was, “I like being in control of myself, and doing certain drugs makes you lose touch. That’s what scares me.”

Bettens was also adamant about clarifying that “Not An Addict” is neither anti, nor pro-drug use, and that the song’s meaning is by no means black or white, much like competing opinions about cannabis dependence. Bettens’ perspective, and song lyrics if anything, reflect modern-day cannabis use debates, captured in the form of a hauntingly melodic internal conflict. Both elated feelings are paired with pondering thoughts of possible denial of a problem, as echoed repeatedly throughout the chorus:

“It’s not a habit, it’s cool, I feel alive
If you don’t have it, you’re on the other side
I’m not an addict, maybe that’s a lie”

It’s also important to bear in mind that Bettens’ interview was published on May 17, 1997 – a time when firm distinctions between addiction and dependence were not as well known, or clear cut to all. This was also well before recreational cannabis became legalized and/or decriminalized in select states, starting with Colorado and Washington in 2012, and countries like Canada in 2018. Even if we shift our attention to the LSD and the magic mushrooms Bettens may have experimented with to play devil’s advocate – fast forward to over a couple of decades later, and lo and behold the unexpected twist. Scientists are now seriously considering both substances as new emerging treatments for addiction, among other conditions like PTSD, depression, anxiety, and eating disorders.

So unless there’s some closet addiction that we don’t know about, of which there is no evidence of, according to a modern-day perspective on this; indeed Sam Bettens was likely not an addict when he wrote the song contrary to what so many blogs and online musical dissections have speculated using the song’s lyrics as “proof.”