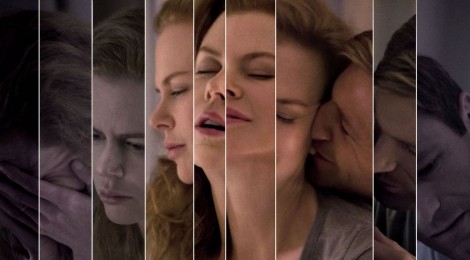 Losing a loved one is never easy, especially a child.  In addition to the pain caused by the loss itself, there are dramatic effects on the parents, on the couple, and on other important relationships.  Rabbit Hole tackles the topic of loss and its accompanying interpersonal dynamics.  The movie follows a couple dealing with the loss of their only child, hit by a car at the age of four.  Eight months after his death, they are trying to come to terms with the tragedy in different and increasingly discordant ways.

Becca and Howie Corbett (Nicole Kidman and Aaron Eckhart) have lost their son fairly recently and are just beginning to regain some sense sort of normalcy.  While Howie goes to work, Becca spends her days keeping the family home and running errands.  Kidman portrays a grieving mother, living day by day, attempting to deal with the void left by the loss.  We sense her internal struggle as she gradually stores away remnants of her son’s existence.  This doesn’t sit very well with Howie, who doesn’t want to forget their son, and would rather hold on to his memories through home videos, pictures and belongings.

Their different ways of grieving reflect differences in their personalities.  While Becca internalizes the emotional storm she is living through, Howie actively seeks support from the outside world to help him deal with the trauma.  He finds solace in a support group, which he attends regularly, where other couples have also lost a child.  Becca attends in the beginning, but soon finds the process frustrating and unhelpful.

Avoiding the verbal expression of loss seems to be Becca’s response to grief.  Even Howie’s encouragement of seeking professional help is met with slight irritability.  Becca’s irritability is also the cause of strain in her relationship with her sister (Tammy Blanchard) and her mother (Dianne Wiest).  At one point Becca scolds her mother for comparing her deceased son, Daniel, to her heroin-addicted brother who overdosed at the age of thirty, further exacerbating the already tense relationship she has with her family.

Director John Cameron Mitchell portrays two characters that are not perfect, and does well making this imperfect quality of human nature the focus of the film.  Becca is shown as a cold and detached person especially to those closest to her.  The emotions she bottles up for so long eventually become uncontainable (Becca gets into an altercation with a stranger when she sees the parent denying the child treats, the altercation ends with Becca slapping the lady on the face).  And Howie’s loving, supportive nature is put to test with a temptation of infidelity with another woman (Sandra Oh).  He attempts to fill the void left by the shadow of what used to be his marriage.

One of the more interesting aspects of the film is the odd bond Becca makes with Jason (Miles Teller), a gentle and artistic high school senior who was the person who killed her son.  Accidently seeing him on a school bus, she follows him and finds out where he lives, eventually asking to speak with him privately in a park.

It is in this relationship that we see Becca come out of her detached emotional state, although it is never really clear whether Becca fully forgives Jason or sees her son in Jason, and what might have been.

Losing a child changes a marriage in ways that can be strange and unexpected.  The characters in this film bring out strong feelings related to grief and bereavement, feelings many of us can relate to.  Although uncomfortable at times, this film is certainly worth seeing.