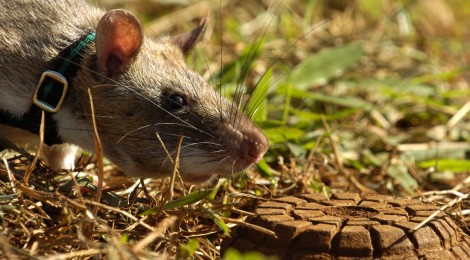 Every fifteen minutes someone is killed or injured by stepping on a landmine.

The CARE Determining Program has estimated that there are 110 billion landmines in the ground spread over more than 70 different countries, and another 250 billion stockpiled ready to be planted.

UN information dates landmines back to 15th century France; by the 19th century they were in common use.  They are the weapon of choice for terrorists as they block access to farmland as well as water and food supplies.  Basic tasks necessary for survival, such as farming become dangerous endeavors in a mine zone.  Decades later, although many of these regions are free from active warfare, landmines remain.

Those who survive after detonating a mine are often left with lost limbs, hearing impairment, and blindness.  Given that most landmines are in third world countries such as Cambodia and Mozambique, access to medical care and equipment is scarce; many injuries become irreparable resulting in permanent and disabling handicaps.

Permanent physical disabilities, the trauma of surviving an explosion, and grieving the loss of loved ones leave landmine victims with depression, anxiety and post-traumatic stress disorder.  For those fortunate enough to escape an encounter with a landmine, there is immense stress in wondering if the next step is going to be the last.  Just as access to advanced medical care for physical injuries has been scarce for landmine victims, there is very limited access to psychological care.

So what is being done to get landmines out of the ground?  Traditionally, they are found using metal detectors carried by workers or machines.  This method can be highly inaccurate and cannot be used to detect plastic mines.  The UN reports that for “every 5000 mines cleared, one worker will be killed and two workers will be injured by accidental explosions,” and this is before the mine is even removed from the ground.

But one organization by the name of Anti-Personnel Landmine Detection Product Development (APOPO), a Belgian Non-Governmental Organization (NGO) lead by Bart Weetjens, has transformed the way organizations are approaching the task of de-mining.  Their secret?  African giant pouched rats.

Weighing only one to two kilograms each, the rats can safely travel across fields without the possibility of detonating a single mine, which requires at least four kilograms of pressure to explode.

APOPO reports that since starting the project in 2010, these “Hero Rats” have found 861 landmines; 373 items of unexploded ordnance; 1 cluster bomb and 6,216 small arms and ammunitions.  In addition to contributing to reducing the landmine problem, APOPO also primarily employs locals with 190 of their 200 employees being citizens of the developing countries where they work.  The cost of removing mines ranges from 50 cents to $5 US per square metre.  The cost of de-mining with rats is approximately $1.50 US per square metre.

The rats are taught to respond to the smell of TNT.  They are trained using operant conditioning techniques, developed by behavioral psychologists such as B.F. Skinner in the 50s and 60s.  Operant conditioning is a practice in which behaviors are shaped to occur under specific environmental conditions through the manipulation of consequences.

By nature, these rats have an exceptional sense of smell. When passing over a hole, these naturally curious creatures will always pause to sniff the contents.  Taking advantage of this innate tendency, the trainers place small amounts of TNT in some of the holes.  When the rats pause over the holes containing TNT, a clicker, conditioned as a “reward” by being paired with food, is sounded.  When the rats pause at any other time their behaviour is ignored.

The end result is that when the rats walk through a mine field, they pause for five seconds only when they smell TNT, making it very easy for trained workers to map out where all the mines are located in the field.

To ensure better accuracy and verify the results, two different rats walk the same path.  Any discrepancies are recorded and the area is retested.  Since food rewards cannot be provided on the field, the rats are provided with booster training sessions off-site in order to ensure that they maintain the conditioned behavior.

Land mines are easy to make and plant, but extremely hard to detect and remove.  They kill thousands of people each year and wreak havoc on the lives of civilians who rely on farming for survival.  By using rats, the APOPO has cleared millions of square metres of land in Africa of mines, saving lives and reducing the trauma inflicted on the people who live there.

Given the number of landmines active at present, Hero Rats still have a lot of ground to cover.

← Not Just a Phase: Depression in Preschoolers
OxyContin: Special Order Only →