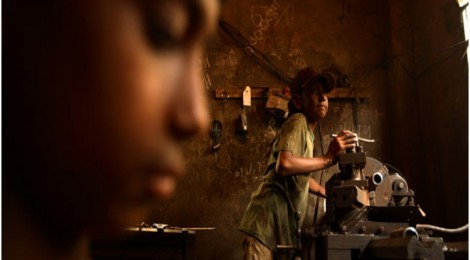 Despite being mostly illegal, slavery remains a global reality.  It is estimated that over 20.9 million people are currently enslaved and involuntarily trafficked within their own countries and across borders.

In an interview with Mark Lagon, Chair of International Relations and Security at Georgetown University’s foreign service program, former Ambassador, and Adjunct Senior Fellow for Human Rights at the Council on Foreign Relations, The Trauma & Mental Health Report learned about human trafficking and the traumatic experiences survivors encounter. Q:  What is human trafficking?

A:  Human trafficking is a contemporary form of slavery – whether for sexual exploitation or forced labour.  It’s not a general form of exploitation that we sometimes see with globalization, but rather, an extreme version.

It involves appealing to someone who is desperate for a better life and looking for economic opportunities.  The work however, often onerous and violent, is very different from what was promised.  It’s important in terms of mental health and trauma to understand that while human trafficking often involves violence, especially for sexual exploitation, much of the control is psychological by the recruiter or trafficker.

Q:  Who is most vulnerable to becoming a victim of human trafficking?

A:  Those who are desperate for a new life and wooed into a situation that is exploitative are most vulnerable.  These groups are denied access to justice; they are not treated as human beings in full under the law, women or minorities – or in South Asia, those of a lower caste.  Migrants are also particularly vulnerable.  It’s not just undocumented workers around the world, but even some legal guest workers who are, through fraud, indebtedness, and having their papers seized, vulnerable to human trafficking.

Q:  How do gender stereotypes play a role in human trafficking?

A:  Females are particularly vulnerable to human trafficking.  Public attitude that “men have always bought women for sex and they always will” is based on gender stereotypes.  Society regularly tolerates women being turned into near commodities.

But women and girls are also victims of human trafficking for labour – in agriculture and domestic services.  In Kuwait, I met a woman who had been victimized as a domestic servant.  She showed me photographs of herself taken weeks earlier.  Her employers treated her any way they wanted.  In cases like these, women and migrant workers are seen as property.

Q:  What are some signs of people stuck in trafficking situations?

A:  There are some clear danger signs.  The one key sign is people who are intimidated and afraid.  Often, victims seem isolated.  Their boss, whether a pimp or supervisor, keeps them from having access to society.

Q:  What are some barriers to receiving help?

A:  Human trafficking victims often don’t identify themselves.  They are afraid that they will be treated as criminals.

Also, aspects of the trauma are not often discovered.  Someone might be rescued but the psychological hold that their trafficker has may not be fully appreciated.  They may flee the shelters and end up going back to their tormentor because of a kind of Stockholm syndrome or post-traumatic stress.  Survivors need mental health treatment, not just shelter and physical health treatment.

Q:  Much of humanitarian work is based on the notion of restoring survivors’ “human dignity,”  Can you elaborate?

Q:  How can we empower survivors?

A:  Human trafficking victims are treated like slaves, but are very seldom in shackles or in chains.  Their tormentors convince them that they are unworthy or they have no ability to flee.  It is essential to restore survivors’ dignity, giving them the therapy and mental health treatment they need.

Q:  What can the general public do?

A:  They can understand that even a small amount of public funding from the government for human trafficking victims and mental health care goes a very long way to help people have their freedom.

Q:  Tell us about your upcoming co-edited book, “Human Dignity and the Future of Global Institutions”?

A:  It looks at how the proper goal for institutions like the UN and the International Criminal Court, is to fight for human dignity, and how well they serve that goal. I’ve written a chapter on human trafficking, and the partnerships between governments, international organizations, non-profits, and businesses that attempted to combat this issue.  And I distinguish between those partnerships that are transformative in helping people reclaim their dignity and those that are doing little for this issue.

For more resources and information on fighting human trafficking, visit the Polaris Project.

← The Power of Empathy (not sympathy)
Heroines →