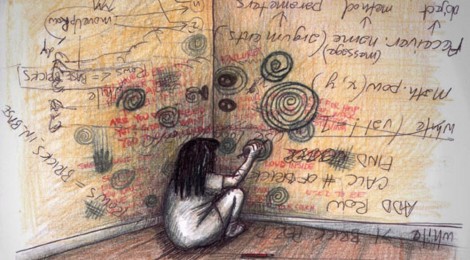 Thomas Szasz, a key player in what came to be known as the anti-psychiatry movement,  died on September 8, 2012.  In The Last Interview of Thomas Szasz, released late September, 2013, director and cultural anthropologist Philip Singer sat down with the iconoclastic figure to discuss the core beliefs that informed his stance on psychiatric practice.

The interview begins with a discussion of the central arguments of Szasz’ major work, The Myth of Mental Illness, originally published in 1961.  In it, Szasz characterized the mind as an abstract concept representing mental processes that cannot be diseased the way a biological entity can.

While x-rays, blood tests, and EKG are used for detecting bodily diseases, the diagnosis of mental illness lacks similar methods, leaving the diagnostic process dependent on the judgment of  observed behaviour.

Szasz saw psychiatric diagnosis as a means to facilitate social control.  Behaviours not tolerated by a given culture may be medicalized and defined as pathological, justifying the need for ‘treatment’.  But in his view, since a mind can’t be sick, it cannot be treated. Reflecting on his own practice as a psychotherapist, Szasz explains to the viewer that he never considered his psychiatric work as ‘therapy’, but instead as simply talking.  His clients were conflicted in life, and his job was to help communicate the problem and help them resolve those conflicts.

But, fifty-minutes into the film, the conversation takes a political and moral turn.

Throughout his career, Szasz maintained a zealous opposition to involuntary commitment and treatment.  The viewer may surmise that Szasz’ defense of this position had less to do with scientific arguments against psychiatry, than a worldview grounded in libertarian beliefs.

As a libertarian, Szasz valued personal freedom and responsibility above all.  Despite the danger that an individual may pose to themselves and others, he considered institutionalizing someone as a violation of personal freedom, and saw it as unethical.

He also believed that labeling someone as not criminally responsible for a crime given their mental stability ignored and devalued human responsibility, and was in turn an illegitimate excuse for criminal behavior.

It’s at this point that a clear tension builds between Singer and Szasz.  The two begin to debate over the ethics and logic of involuntary commitment and the insanity defense.

One is tempted to consider that Szasz’ stance against involuntary commitment and the insanity defense as informed less by science than by political philosophy. Dispersed throughout the film are cutaways to newspaper articles on Szasz emerging from the publication of The Myth of Mental Illness.  While this helps convey the popularity of Szasz’ ideas, it disrupts the film’s flow.

The film neither idolizes nor sensationalizes.  As an interviewer, Singer effectively explores Szasz’ insights, and challenges the politically charged claims and their appropriateness to current views of mental illness.

The film succeeds in presenting the range of Szasz’ ideas in an accessible manner, and serves as an introduction for those unfamiliar with his work.

But it might have benefited from engaging Szasz in a more elaborate discussion on the work he did with his own patients, and how practitioners today might apply the work to their practice (for those itching to know, Szasz did leave behind 34 published works available for reference).

Still, the viewer is left with a sense of understanding and closure.

A week before his death, Szasz sustained severe damage to his spinal cord resulting from a fall, but rejected medical advice that he be admitted to hospital for surgical intervention.  To the end, Szasz practiced what he termed as being our “ultimate, fatal freedom”.

← Asleep
Art Therapy and the Science of Happiness →