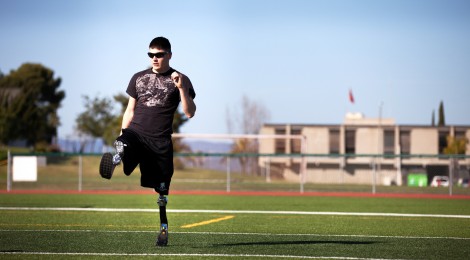 Exercising Your Way to PTSD Recovery

Recent headlines about suicide, domestic violence, and shootings have brought to public awareness the mental health strain that is placed on the men and women in our military.

Post-traumatic stress disorder (PTSD) can drastically alter the lives of sufferers and is particularly common in veterans. The condition has been documented in 8% of Canadian soldiers who served between 2001 and 2008 in Afghanistan.

In an effort to develop treatment options, many are looking to physical remedies such as intense exercise to help those suffering from PTSD. We know that those who exercise regularly are less likely to suffer from anxiety and depression. But research by Mathew Fetzner and Gordon Asmundson at the University of Regina found that two weeks of stationary biking can be helpful in reducing PTSD symptoms and improving mood.

Further, researchers at Loughborough University have reviewed multiple studies that looked at the impact of sport and physical activity on combat veterans diagnosed with PTSD. Their findings: physical activity enhances well-being in veterans by reducing symptoms and improving coping strategies. Symptom reduction in these studies seems to occur through a renewed sense of determination and hope, increased quality of life, and the cultivation of positive self-identity. The researchers explain that participating in sports and physical activities helps combat veterans gain or regain a sense of achievement.

Treatment adherence is often a problem for PTSD sufferers, given that formal therapy is not always appealing to them, Fetzner claims. Low dropout rates of therapies involving physical exercise make the intervention feasible. But the positive effects of intensive exercise on PTSD may be suitable only for some combat veterans: those with the physical ability to participate.

According to Veterans Affairs in Canada, psychiatric conditions are the second-most common cause of disability among returning soldiers. Debilitating physical injuries, such as amputations, and traumatic brain and spinal chord injuries are more common. And in addition to PTSD, the two most common mental health problems among returning soldiers are substance abuse and depression. More than 80 percent of the time, combat veterans have more than one diagnosis.

While aerobic exercise significantly reduces depression symptoms and helps prevent the abuse of drugs, the high rates of physical impairment in returning soldiers complicates the optimistic picture of exercise’s benefits on PTSD.

Less physically demanding exercise may be an option. Recent research shows that yoga, for example, may help individuals with PTSD focus on the present, reduce rumination, and combat negative thinking patterns.

While strenuous physical exercise may only be helpful for some returning veterans, milder forms of exercise and physiotherapy may be a useful adjunct to traditional treatment for many others. In either case, it is important for researchers and clinicians alike to take note of alternative ways of treating PTSD in an effort to provide options to those affected with the debilitating disorder.