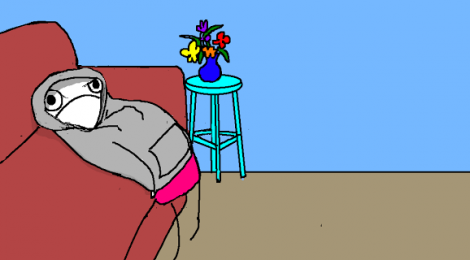 From the darkness of despair, Gemma Correll and Allie Brosh have created deeply personal cartoons to illustrate their experiences with mental illness. Maintaining popular online blogs, they have recently published cartoon books revealing their innermost struggles and fears.

Through simple drawings, Correll and Brosh make it easy for audiences to grasp the intricate aspects of psychological disorders. The unique illustrations are designed to be informative, yet dark and humorous.

In her 2015 book, The Worrier’s Guide to Life, Correll portrays her experience with anxiety, including unwanted intrusions from unexpected guests and unwelcome phone calls that one would prefer to avoid. She labels them “Real Life Horror Movies.” Another example of Correll’s sharp humour comes in the form of a red poster, shouting: “I can’t keep calm and carry on because I have an anxiety disorder.”

Though the images are vital to the message, the corresponding narratives are equally important. Correll explains her images only make sense in combination with the words. One poignant cartoon called “Visit Depression Land! It’s the crappiest place on earth,” depicts a “non” amusement park with commentary on all of the “non” amusing things you can do while visiting. The comics are both painful and funny. One of Correll’s fans sums up the experience on Twitter: “I’m laughing but I’m also crying. But I’m also laughing.”

A common thread in the struggle with mental illness is the accompanying isolation; in these comics, readers see themselves and their situations, and perhaps realize that they are not alone in the experience. In an interview with NPR, Correll explains, “I think people are really glad to find somebody who’s had the same kind of experience. Anxiety and depression can make you feel quite isolated.”

This sentiment was echoed by Brosh in an online Reddit question and answer session:

“Depression is such an isolating experience, but there’s always a tiny amount of comfort from knowing that someone else has been out there too. I mean, I never thought that writing about my depression would circle back around and make me feel less isolated, but in a strange way, it has.”

Although depression can be difficult to explain, Brosh chronicles it with startling clarity in her blog Hyperbole and a Half:

“I spent months shut in my house. I couldn’t feel anything through the self-hatred. Trying to use willpower to overcome the apathetic sort of sadness that accompanies depression is like a person with no arms trying to punch themselves until their hands grow back.”

In another blog entry with an accompanying cartoon, Brosh captures how depression feels: Brosh painstakingly works to get the facial expressions and body stances of her characters just right, to depict the emotions she wants to convey. Visual cues give meaning where words fail.

Depression is often misunderstood by those who don’t suffer from it. Many think that giving advice and imposing optimism are the answers. Brosh illustrates this disconnect. Psychologists and professors are taking note—sharing the blogs widely and using them as teaching tools.

Psychologist Jonathan Rottenberg of the University of South Florida devoted a post on Psychology Today to Brosh:

“I know of no better depiction of the guts of what it’s like to be severely depressed. If you’ve been severely depressed, or if you know someone who is and you want to know more about what they are experiencing, please read ‘Hyperbole and a Half.’ “

Psychotherapist, psychology student, and Reddit user ‘busterbrother’ also explains on Reddit how the cartoons made a difference in her practice and at school. One of her suicidal clients struggling with depression felt that no one understood. Using Brosh’s blog, the therapist could offer an account of someone facing similar difficulties. ‘Busterbrother’ also used the blog in a presentation to illustrate depression to others in her cohort, after which her professor began incorporating it into his own classes:

“The professor said that this blog is the best way that he has ever seen someone talk about depression to someone who has never experienced it.”

This idea is supported by research. In the International Journal of Humor Research, Yan Piaw Chua, a professor at the University of Malaya in Malaysia, demonstrated how this type of humour can enhance student comprehension and motivation to learn. And studies show that humour can improve wellbeing and reduce depression.

Researchers Shelley Crawford and Nerina Caltabiano at James Cook University in Australia developed a humour skills program that included a booklet with jokes and funny stories. They found that participants achieved heightened wellbeing, as well as decreased depression and anxiety, in comparison to groups that received treatment without humour or no treatment at all. Other studies have shown similar results.

As one reader put it: “…these comic strips make my day whenever I am feeling a little glum and need an instant pick-me-up.”

Being able to communicate feelings of depression and anxiety without being judged, and doing so creatively… what better way to combat demons?