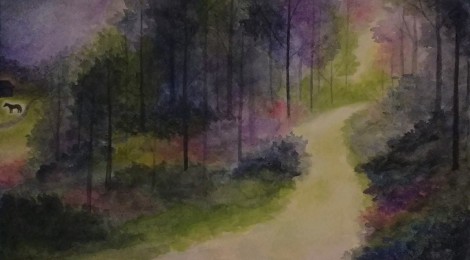 Where do we draw the line between wishing for better fortune and using fantasy as escape? This question is at the heart of a recent thought-provoking short film, The Wish Horse.

Written and directed by Lisa Ford, the film looks at magical thinking to address mental health, telling the story of a single mother with bipolar disorder and her two young children.  It takes its name from the experience of six-year-old Kitty, who believes a neighbouring foal can grant wishes.

“Why don’t you use your wish? You can wish for mom to come back home.”

Kitty gives this advice to her 14-year-old brother Russell after their mother suddenly leaves them. But Russell, who struggles to carry the family load doesn’t believe in wishing.

Living with a mentally ill parent is always difficult. But in the case of Kitty and Russell, it’s practically unbearable. Isolated from supports, their mother has a hard time managing her disorder, and eventually things get so bad she leaves home and her children behind for some time.

Pierce Rasmussen as Russell in The Wish Horse

According to Joanne Nicholson, Professor of Psychiatry at Dartmouth Psychiatric Research Center, absence of mental health assistance was one of the important social issues depicted in the film:

“I wondered and thought a lot about what kind of services would have helped the mother and family because there are lots of better options than to live the way they were living.”

And a better life is what young Kitty wished for.  Speaking with the Trauma and Mental Health Report, director Lisa Ford commented on the concept of magical thinking:

“I hope audiences will make the connection that Kitty is using what child development experts would call “magical thinking” to try to understand and cope with her circumstances.”

Magical thinking describes a variety of irrational beliefs. In an interview with Scientific American, Harvard psychology fellow Piercarlo Valdesolo defines it as “the belief that an object, action, or circumstance not logically related to a course of events can influence its outcome.”

But Eric MacMaster, a child and adolescent psychiatry fellow at SUNY Upstate Medical University believes the line between adaptive and maladaptive magical thinking may be more fluid:

“Magic or fantasy is both normal and a defense simultaneously. The little girl bestowing powers on a horse provides a way to detach from what can sometimes be a harsh reality.”

MacMaster thinks we should see defenses as common rather than strange, particularly in the case of Kitty:

“I suppose there is some negative association with the term ‘defense mechanism’, but in reality people utilize defenses daily. In this case as the character is a child, the use of fantasy is usually seen as developmentally appropriate.” The movie ends with Russell and Kitty leaving their family home for good, walking through the woods to the sound of calm music in the background. There’s a sense of Russell finally believing in wishing. The viewer assumes an optimistic future as their unhealthy surroundings are now left behind. But… a future without a mother? It may be hard to see that as hopeful, yet in the film’s world, there is no black and white, and in director Lisa Ford’s view:

“We do have some hope that Russell may be able to take care of her and that the kids might ultimately be okay. The ‘going into the woods’ part is a metaphor for the many paths the kids may travel in the future.”

Of course, other viewers will agree with Nicholson that this kind of family disruption is more traumatic than anything:

“Most families don’t want to be disrupted. Maybe it’s the safe thing to do in the moment but lots of families wish for treatment and services so that they can stay together.”