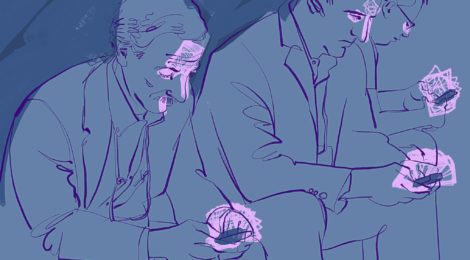 “I would say that the liberation outweighs the fear.”

Jack Bingham, author of the book Obsessive Compulsive Dramatic, has a long history of disclosing his experiences with Obsessive-Compulsive Disorder, borderline personality disorder, and multiple substance addictions online. He says that sharing this information publicly on Instagram and YouTube, has brought a community of supportive peers who help him in his recovery.

While some consider the internet as isolating and therefore damaging to mental health, online communities may have a uniquely empowering effect for those living with mental illness. One study found that self-disclosure on social networking sites can lead to an increase in social support and improved online social wellbeing. Another study found that participating in online chat sessions can decrease loneliness and depression and increase perceived social support and self-esteem.

Online communities specifically dedicated to discussion and disclosure of mental illness can be found on a variety of platforms, such as Tumblr and Reddit. In an interview with the Trauma and Mental Health Report Bingham elaborates:

“If you need something online there’s definitely a community for it. There’s no real lack of resources. Everything on the internet is free. If you’re desperate – maybe you live really rurally or you suffer from agoraphobia –  there’s definitely resources online.”

He goes on to say: “There’s a common kinship with people who have the same illness.” But there are also downsides to sharing online. We interviewed John Suler, professor of psychology at Rider University in New Jersey and author of the book The Psychology of Cyberspace, and he relays some of the negative experiences that can occur:

“Bullies and trolls may use the opportunity to attack the person. Also, others might offer unhelpful feedback based on their own personal biases and projections.”

There is also the potential for misinformation as those who post online are typically not professionals. Suler explains that:

“People might seek the wrong kind of help or misdiagnose themselves. Algorithms tend to steer people towards the worst-case scenario, resulting in cyberchondria.”

One of the biggest risks of sharing mental health information online is the possibility that doing so will turn into a crutch, preventing the person from seeking out “real” social interactions. This may include avoiding therapy from a professional who could provide comprehensive treatment.

Bingham comments on a darker aspect of this online culture, saying:

“You can get immersed into a culture of despair online. There are unlimited depressing things online, if you spend all of your time wallowing in self-pity it will harm you.” There are some best practices for engaging in online mental health disclosure. Suler advises one way to minimize the potential for harm when sharing mental health information online in a group context:

“It’s best to observe the group for a while before participating. See what the other people are like and how they react to each other.”

Bingham believes it is important to go into these spaces considering whether you want to be anonymous or not:

“You feel vulnerable. You have moments where you’re like, “did I say too much?” and you freak out a bit. You have to be cognizant about that going into it. Moving out of isolation is a huge first step for a lot of people. Doing that anonymously or not anonymously are both great, just taking action is important.”

When looking to communicate sensitive information online, it’s important to think about how the content could impact and be interpreted by others. Being upfront about the things one doesn’t know is critical, as Bingham relates:

“I don’t talk about anything I haven’t experienced. It’s always “I” statements; “I was dealing with this and I did this.” If I haven’t been through the situation, I just tell the person I haven’t.”

As for responding to the disclosure of others, Suler advises:

“At first don’t necessarily offer “solutions.” Just listen to and accept the person. Some people jump to conclusions when they offer advice.”

So long as it’s done thoughtfully, there may be some advantages to sharing mental health struggles on online platforms.  But take into consideration the platform, other people’s different needs in these online spaces, and potential ramifications. Bingham reflects:

“Honestly, I don’t know if I would have ever got sober or recovered from anything if I lived in a time before the internet. You don’t always hear the right message, but on the internet, you have so many more opportunities to hear what you need to hear.”

← Painting the Highs and Lows of Life
Trapdoor →