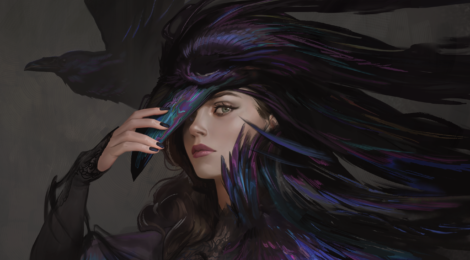 Canadian author A. J. Vrana’s debut novel, The Hollow Gods, follows the intersecting paths of three characters: Miya, a maladjusted, floundering university student who yearns to escape the mundane; Kai, a brazen and ferocious young man who is haunted by a sinister presence; and Mason, an idealistic but disheartened oncologist fleeing the trauma of losing his first patient.

When Miya experiences signs that she may be the next victim of a supernatural kidnapping, her struggles with depression, anxiety, insomnia, and social isolation are brought to the fore. Her survival hinges not only on unravelling her town’s history of communal violence but exploring her own uncertainties as she crosses paths with Kai, who is contending with the lingering impacts of traumatic loss.

The following is an excerpt from Vrana’s The Hollow Gods, a folklore-infused contemporary dark fantasy that highlights the complexities of both personal and communal trauma.

“Everyone had something they hated about themselves. Miya, for one, felt like she never tried hard enough. If she flunked a class, it was because she didn’t study hard enough. If she didn’t sleep, it was because she didn’t count sheep long enough. Anxiety was the product of neglecting to get help fast enough, and when she finally called the helpline—well, she didn’t wait on hold long enough. Miya was plagued by the incessant fear that her misfortunes were of her own making, and that every failure was a result of her unwillingness to change—to study harder, to count a few more sheep, to act faster and wait longer. It was absurd to think the difference between happiness and misery was how long a person was willing to listen to wearisome music on a busy phone line.”

Visit the author’s official website for more on her work: https://thechaoscycle.com/

← How Are You Doing? “Terrible, Thanks For Asking.”
When the Pain of Endometriosis is Dismissed →