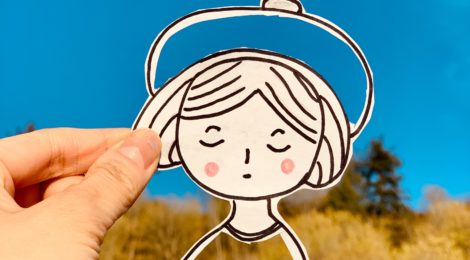 Fatima Faiyaz, a Pakistani-Canadian artist based in Ontario, is the creator behind the works collectively referred to as the Stickmens Series. Beginning as simple pen-to-paper doodles, Faiyaz began creating these images as a healthy outlet for her emotions. Having spent a lot of time alone when she was young, Faiyaz would turn to these doodles when she felt overwhelmed with her situation or the intensity of her emotions. The stickmen quickly became a cathartic and fulfilling medium for self-expression, and “it took off from there, as I hastily scribbled away and transformed the oftentimes complex and confusing mental knots into simple, minimalistic scenarios.”

Faiyaz’s Stickmens Series aims to destigmatize and raise awareness of various mental health struggles while extending a hand of compassion and understanding to those who live with them everyday. The image featured below is titled “Weather” and is accompanied by the quote:

“I don’t want to talk about the weather; tell me about your darkness.” To view Faiyaz’s Stickmens Series in its entirety, visit her Instagram @stickmensseries.

← E20: How to be an Ally for Transgender Individuals
The Cure for Burnout (Hint: It Isn’t Self-Care)   →