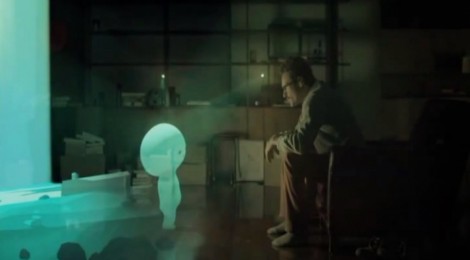 The premise of the film Her seems rather unlikely. Written and directed by Spike Jonze, it features a lonely writer who falls in love with his human-like operating system, which is just a voice. But this science fiction romance may be closer to reality than you might think.

Despite being set in the future, this re-imagined world does not seem unfamiliar. Unlike many science-fiction stories, Her does not venture far from the technology we have today. Theodore uses his phone’s voice recognition system daily and plays video games using hand gestures, which parallel Apple’s Siri and Microsoft’s Xbox Kinect, making it easy for the viewer to relate. The film strategically opens with an introduction to Theodore’s unusual profession, showing how human interaction has changed. The characters exist in a world where expressing emotion is too difficult for most. Instead, they pay others to express emotions for them.

The nature of Theodore’s work also lends to his character development. Immediately, the audience sees Theodore’s empathic and sensitive personality through his letters. But as he writes, we see his pain; the love letters resonate for him.

Known for playing intense characters, Joaquin Phoenix exquisitely executes this role as the soft-spoken and soulful Theodore. His Golden Globe nominated performance creates a loveable character with whom viewers empathize…we want to see him succeed in his pursuit to find happiness.

It becomes apparent that Theodore is in the midst of a divorce, the reason for his somber mood. Alone and in desperate need for new experiences, a form of artificial intelligence named Samantha (voiced by Scarlett Johansson), piques Theodore’s interest.

The human-like operating system, which promises to be the most intuitive of its kind, is a perky female voice that has the ability to evolve to the user’s demands. She seems human in every way.

Johansson’s vocal performance is praiseworthy. She expresses and captures an array of emotions through only her voice, a difficult task for any actor. Her colourful vocal intonations create a vision of what Samantha would look like if she were human.

Still coping with the end of his marriage, Theodore finds companionship through Samantha and the two develop a romantic relationship.

Since we believe that love can only be shared between living beings, it’s difficult to imagine someone falling in love with a technological entity. But it is not this literal interpretation that Jonze is getting at.

We are becoming encapsulated by all things technological, particularly social media. Some use technology to cope with important life issues –there is growing interest in texting-accessible crisis hotlines. Jonze brilliantly captures this new kind of dependence on technology. While writing the screenplay, Jonze’s aim was to create a love story that portrayed the role technology plays in our relationships. Theodore is ultimately afraid of real intimacy and hides behind Samantha to avoid the stress that companionship causes. Theodore tries to mend his loneliness and insecurity by confiding in Samantha. But, we come to realize that his relationship with Samantha does not fulfill his needs. Jonze speculates that our “relationship” with smartphones and social media won’t either.

Despite being a fictional story, this academy award winning film brings all of these real issues to the forefront. It provokes discussion about the future of human nature and the role technology plays.