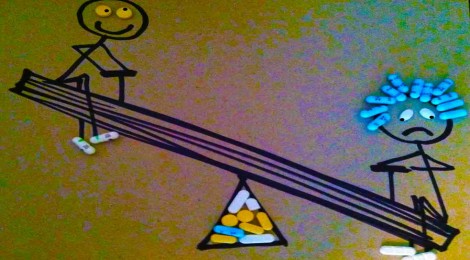 Lauren and I have been friends for a long time.  More than once, she had mentioned to me that she had bipolar disorder, but I never gave it much thought.  It always seemed under control, and I knew she was getting help.  When we decided to move in together, I was not concerned.

But it became apparent immediately that she did not have her mental illness under control.  Long depressive episodes, where she did not talk to anyone, were followed by short manic ones (when she was great to be around).  As a friend, I had no idea how to help or how to help myself while living with her.  I was confused when she would suddenly get angry at me, and I worried about what to do if she hurt herself.  And if I were to call someone I didn’t know how she’d react.

Over the past year I’ve learned a lot about the disorder, how to deal with it; not as a psychologist or therapist, but as a friend.

It is difficult to accept, but sometimes people in a depressed state don’t feel like talking, and not because they dislike you, or because they’re being rude.  Mdjunction.com tells readers that one of the “do’s” of dealing with a loved one is to “realize your friend is angry and frustrated with the disorder, not with you.”  I once asked Lauren why she would ignore me for days at a time and she told me that sometimes she doesn’t talk just to avoid crying on the spot. Drinking made Lauren manic.  On the surface, mania doesn’t look all that bad.  The person is happy, exuberant, and outgoing.  But those with bipolar disorder who are manic often crash into a depression that lasts longer and is more severe than the mania.  I pointed this out to my friend, explaining that when she drank, her night usually ended in depression.

She responded, and cut down her drinking.  But some may not be as willing to take responsibility.  It’s impossible to force a friend to change, but pointing out triggers may give them some insight into their behaviour.

Talk to their family when necessary

Luckily, Lauren has a caring supportive family.  Her brother and I have exchanged phone numbers, and if something happens to Lauren where I’m in over my head, I can notify her brother and ask him to help.

Know when to call for help and own your decision

Once I had to call an ambulance for Lauren.  After finishing a bottle of prescription sleeping pills, she admitted to me that she wanted to die.  She could barely form a sentence and I feared the worst.  It was a difficult decision, I knew I risked losing Lauren’s trust but I called anyway.

Terri Cheney, author of: A Memoir and The Dark Side of Innocence: Growing up Bipolar writes “If someone you know or love talks about suicide, even jokingly or in a passing remark, stop and listen.  Ask if he or she has a plan….Above all, take it seriously.” You don’t know how they feel

Don’t pretend to understand how someone with bipolar disorder feels.  Being empathetic and actively listening to what your friend has to say will go much further than telling them about that time you were sad and how it’s the same.  It’s not.  And most important, do not tell them to just “get over it.”  It’s not so easy.

Don’t put your friend’s needs before your own

Sociologist Jeanne Segal, author of The Language of Emotional Intelligence, writes that “Supporting your loved ones may involve some life adjustments, but make sure you don’t lose sight of your own goals and priorities.”

I used to invite Lauren everywhere.  I did enjoy her company; but on reflection, I think I was doing it largely out of fear.  I worried she’d hurt herself home alone.  Looking after her was emotionally draining.  I came to realize that not only did I have to learn to trust her alone, but I also needed my own time with friends, I needed to focus on my own life.

Having a friend or a family member with Bipolar Disorder can be complicated, and may require time and patience.  But the illness doesn’t have to define the individual.  Lauren is the same person I knew long before I knew of the diagnosis, and she is still a great friend.

But now I have learned to become more empathetic and accepting of people, whose moods I cannot justify…or even fully comprehend.