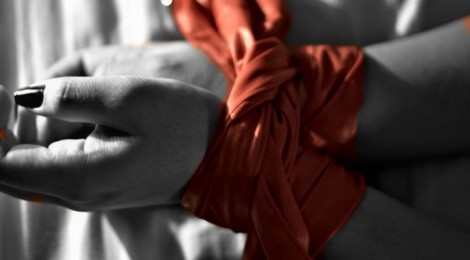 He saunters into women’s lives, gives them a wink, and they trip over themselves to gain his affections. Little do they know, he is incapable of such basic inclinations as love, having in fact buried his emotions years ago in the corners of his cold heart. He naturally becomes even more desirable, and the women who were tripping over themselves before, now desperately crawl after him.

This cannot last forever, and the lone wolf must leave, a trail of broken hearts in his wake. The plot has appeared in many Hollywood movies, ranging from classic westerns, to gangster films, to the James Bond series. Even romantic comedies have jumped on the bandwagon, with jaded, rejecting players who finally meet “the one” and struggle to learn how to love. Christian Grey has all the typical trappings of the tall, dark, and mysterious stranger. He refuses any type of romantic relationship, claiming to not be a “flowers and romance kind of guy”. He forbids Anastasia from touching him or even making eye contact during sex. Though we may shake our heads and claim we would never endorse such a relationship, the series has sold over 100 million copies globally.

A quick perusal of most fan-generated lists of sexiest male characters reveals our obsession with solitary, rejecting men: James Bond, Indiana Jones, George Clooney in pretty much anything, Batman, Edward Cullen (whose heart is literally dead) are just a few.

We love characters who can’t love us back. Though there are slight differences, the Christian Greys and James Bonds of the world are strikingly reminiscent of the dismissive-avoidant attachment style.

Briefly, the dismissing-avoidant attachment style is characterized by discomfort with intimacy or feelings of vulnerability. Being emotional or dependent is equated with weakness. Hollywood has ensured that we find this type of character irresistible. It’s hard to find a movie that doesn’t frame the solitary male as desirable. By the same token, it’s rare to find a “clingy” (or anxiously-attached) character portrayed in a more positive light.

Of course fiction is fiction, but Hollywood and related popular culture permeate norms. It’s hard to ignore the influence on our vocabulary and perceptions of self and other. Who doesn’t secretly want to be as cool as James Bond? As nonchalant as Don Draper? As flippant as Mary Crawly (an avoidant woman for a change)? Nobody wants to be the clingy ex-girlfriend or the nagging mother-in-law.

So why do dismissing-avoidant types get all the screen time, portrayed as the coolest of the cool while the anxiously attached are stereotyped as clingy and annoying? Is being stoic and rejecting better than seeking too much affection? It’s important to draw a distinction between what actual dismissing-avoidant individuals are like and Hollywood’s portrayal of them. It’s not like dismissing-avoidance gives you physical agility, a six-figure salary, and an arsenal of quippy pick-up lines. More likely, you would have frustrating intimate relationships, a higher likelihood of mental health difficulties, and an underlying anxiety that is kept at bay by means of defensiveness. Films often portray such individuals without the negative aspects we would more commonly see in real life.

So why does Hollywood portray dismissing avoidance in such glowing terms? Two words: It sells.

Imagine if, in the first James Bond film, agent 007 had settled down with Honey Ryder in a gated community with two kids and a dog. There would hardly be a 25 film franchise. To keep milking the character, he must never be tied down. The character rarely changes. And the producers hit “reset” when they start creating the next film.

Although 50 Shades of Grey is not the main culprit, it is symptomatic of our masochistic submission to dismissing-avoidant characters.

I suppose there are worse ways to spend an evening out.

← I’m Not Alright
Everything Will Be OK →